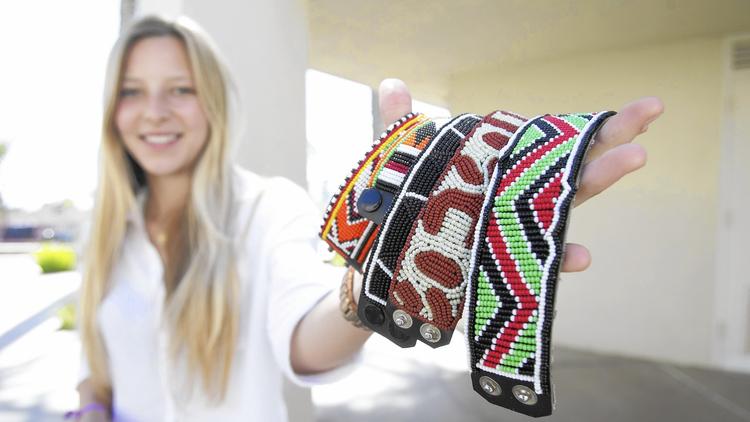 group of Laguna Beach High students have raised two-thirds of the cost needed to purchase a wind- and solar-powered generator that would provide electricity for a Kenyan elementary school.

Laguna senior and foundation President Rose Niermeijer briefed the Laguna Beach Unified School District board about the group’s progress at a meeting last month. The foundation has raised nearly $9,200 toward its goal of $15,000 for the generator.

Oloolaimutia, which has 685 students, does not have any lights. The generator is expected to provide 5,000 watts of electricity per day, enough to power 20 classroom lights and eight dormitory lights for five hours daily, according to the foundation’s website.

“If the sun is not shining, chances are the wind is blowing,” Shen said. “It’s dependable.”

In 2014 the foundation, with the help of private donors, raised $3,500 to provide 75 desks to a fourth-grade class at Oloolaimutia, the foundation’s website said.

Shen’s visit to the Kenyan village four years ago sparked his work with the Oloolaimutia school.

He and his wife were on a safari in the region and the villagers offered them a tour. At the school, Shen met teacher Gladys Kiu, who told him she travels 60 kilometers to access the nearest computer.

Shen wanted to help, so he and Kiu brainstormed fundraising ideas.

An african mask is an example of the jewelry that the Laguna Model United Nations Foundation sells to raise money for women in Kenya’s Maasai Mara region. (Don Leach / Coastline Pilot)

In addition to providing the generator, they wanted to help Maasai women make a living. The women create bracelets out of leather and beads, so Laguna’s Model United Nations foundation started selling the items at school events, with all proceeds benefiting the women.

Laguna Beach High students can sell the bracelets for more money in the U.S. than in Kenya — $20 compared to $2 in Kenya, Niermeijer said. A teacher in rural Kenya makes about $20 a week.

A fundraising drive in October generated $500 for the women.

Shen hopes to raise enough money to cover the cost of the generator by June.

Niermeijer said participating in the Model United Nations program has broadened her knowledge of living conditions in other parts of the world.

“To see the joy in their faces when they unloaded desks off the bus, some of us take it for granted,” Niermeijer said, recalling a video of supplies arriving at Oloolaimutia. “We don’t think people sit on a concrete floor when they go to class.”

As for Laguna’s Model United Nations class, Niermeijer said enrollment has more than doubled — to 80 students — from about 30 when she joined as a freshman. The foundation has about 25 members; they aren’t required to be enrolled in the course, taught by Jonathan Todd and Shen.

Todd started teaching the course in 2001.

“It’s never been better as far as the level of kids we have, the work ethic of the kids, and for me, it’s my passion to teach this class and see these kids grow,” Todd said during the March 8 meeting.

As part of the coursework, students research a country and its stance on a certain policy issue and present their arguments at conferences. Participants learn critical thinking and research skills and “realize that we’re part of a larger interdependent network,” Shen said.

The foundation received an extra boost when Laguna senior Grant Richardson, a four-year Model United Nations program member, said he would donate all of a $1,000 grant from Disneyland Resort Dreamers & Doers program to the group.

The program recognizes high school students who “take action to improve their community, home or school,” according to Disneyland Resort’s website.

To learn more about Laguna’s Model United Nations Foundation and its efforts in Kenya, visit lbhsmunfoundation.org.