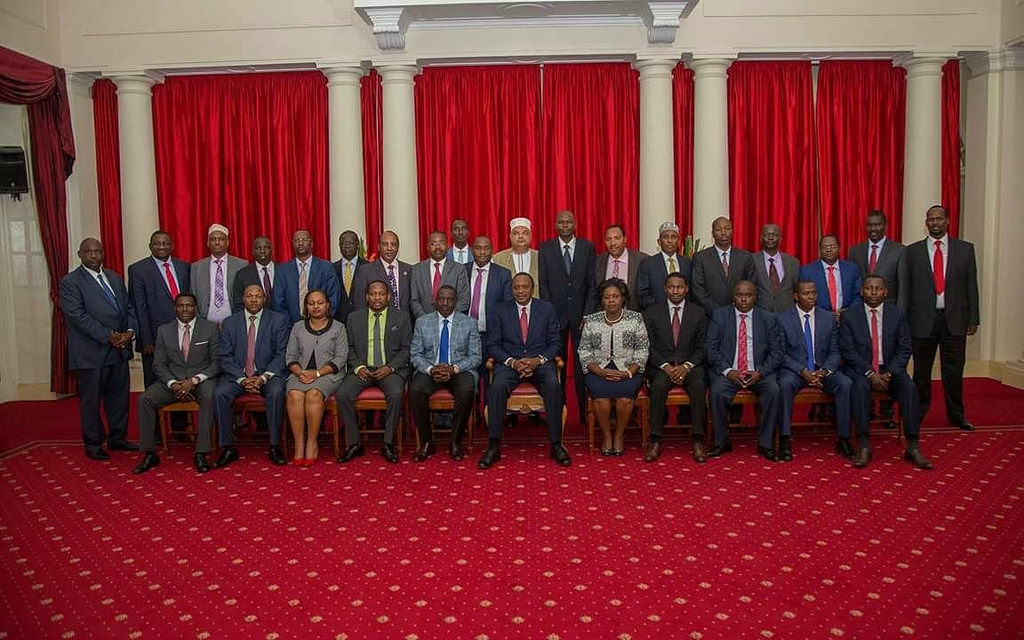 President Uhuru Kenyatta today met governors elected on the ticket of Jubilee Party and its affiliates where they agreed to elect Kwale Governor Salim Mvurya as chairman of the Council of Governors. PIC|PCSU

NAIROBI, 30 AUGUST 2017, (PSCU) — President Uhuru Kenyatta today met governors elected on the ticket of Jubilee Party and its affiliates where they agreed to elect Kwale Governor Salim Mvurya as chairman of the Council of Governors.
Governor Mvurya, who defected from the opposition and won re-election with an overwhelming majority, has previously served as deputy chairman of the CoG for two terms. Jubilee controls majority of the counties.
President Kenyatta said the Council of Governors is supposed to play an important role in managing the affairs of devolution. President Kenyatta regretted that the last five years were marked by confusion, which was mostly created by those who served as chairs of the CoG.
“We have been elected on a shared platform. Let us work together for the betterment of our people,” said the President when he met the governors  at State House, Nairobi.

The President said good inter-governmental relations between counties and the national government will benefit all Kenyans.
“I am asking that this time we start on the right foot. Let  us not be people who engage in confrontation,” said the President. “Do not make the Council of Governor a venue for competition; make it truly a venue for developing issues for consultation.”
Deputy President William Ruto said Kenyans have given Jubilee Party an overwhelming mandate.
“We have increased our numbers because the people trust Jubilee with devolution. That was a clear mandate,” said the DP.
He said 62 per cent of governors belong to Jubilee, which also controls 54 per cent of Senate and 61 per cent of the National Assembly.
“We in Jubilee believe in devolution. We are going to transform this country through devolution,” he said.
Earlier, President Kenyatta chaired a Jubilee Parliament Group meeting where the party agreed on the leadership in Parliament.
It was proposed that Justin Muturi will remain as speaker of the National Assembly while former Bungoma Governor Ken Lusaka has been proposed as the Speaker of Senate.
Kwale Governor Mvurya proposed for chair of governors’ council Reviewed by samrack on August 31, 2017 .