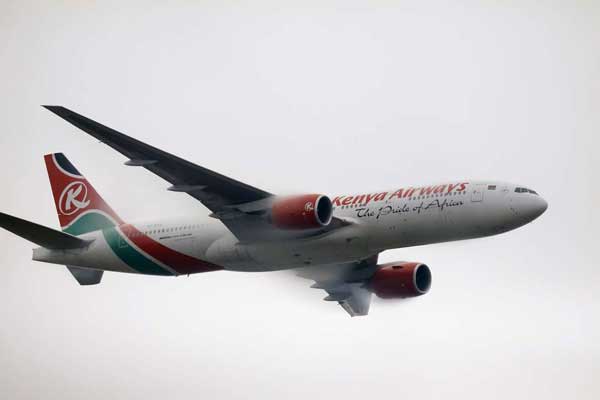 Kenya Airways (KQ) flight 100 got huge attention on November 8, 2017 after thousands of internet users in the UK tracked it for hours as it carried British International Development Secretary Ms Priti Patel who is embroiled in a major scandal back home. FILE PHOTO | NATION MEDIA GROUP

Kenya Airways (KQ) got unsolicited advertisement worth millions of shillings after thousands of internet users in the UK tracked one of its flights for hours.

The move came after it emerged that British International Development Secretary Ms Priti Patel, who is embroiled in a major scandal back home, was aboard the flight.

The arrival of flight number KQ 100 at Heathrow Airport was covered live on all major TV channels.

Ms Patel was ordered back from Africa by Prime Minister Theresa May following controversy over her meetings with Israeli officials.

She left Nairobi aboard KQ 100 on Wednesday for the eight-hour flight.

More than 22,000 users tracked the flight on flightradar24.com.

And on Twitter, users tracked the development using the hashtag #HasPritiLandedYet.

TV stations deployed helicopters and tracked her limo as it snaked through the busy London streets to 10 Downing Street where she was set to meet with Mrs May.

Ms Patel apologised on Monday to the PM about unauthorised meetings with Israeli politicians in August.

But there are now questions about further meetings held in September.

BBC diplomatic correspondent James Landale said the international development secretary had cut short her official trip to Uganda to fly back to the UK.

Ms Patel was formally reprimanded in Downing Street on Monday, where she was asked to give details about a dozen meetings she had with Israeli officials while on holiday, which were not sanctioned by the Foreign Office.

It has also now emerged that Ms Patel conducted two further meetings in September without government officials being present.

It is thought Lord Polak, honorary president of the Conservative Friends of Israel, was present at both meetings.

It is not yet clear whether Ms Patel had informed the prime minister about these meetings or of her plans to look into giving tax-payers’ money to the Israeli military to treat wounded Syrian refugees in the Israeli-occupied Golan Heights region – a request that was turned down as “inappropriate” by officials.

In a further development on Wednesday, the Israeli Haaretz newspaper reported that in August, she visited an Israeli military field hospital in the Golan Heights – the UK, like other members of the international community, has never recognised Israeli control of the area seized from Syria in the 1967 Six-Day War.

There was no immediate comment from the Department for International Development on the report.

Ms Patel was forced to correct the record earlier this week about the number of meetings that she had attended and when the Foreign Office had been notified about them.

The MP said she had been wrong to suggest to the Guardian that Foreign Secretary Boris Johnson knew of the trip in advance when he had only learnt about it while it was under way.

In the Commons on Tuesday, Foreign Office minister Alistair Burt – who was in Israel on official business at the same time as Ms Patel’s unofficial visit in August – said that Downing Street regarded the matter “as closed” after Ms Patel had been reprimanded by the prime minister and reminded of her obligations under the ministerial code.

Ms Patel, who has been an MP since 2010, is a long-standing supporter of Israel and a former vice-chairman of Conservative Friends of Israel.

Former Labour lord chancellor Lord Falconer told BBC Radio 4’s Today: “She should not be colluding with a foreign government – it doesn’t matter if it’s an ally or not… to do it in that secretive way makes her look like she’s much more the emissary of the Israeli government than a member of the British government.”

Former Conservative international development minister Sir Desmond Swayne said that even if Ms Patel was forced to quit, just a week after Defence Secretary Sir Michael Fallon resigned for inappropriate behaviour, it would not be a “catastrophe”.

“There are 22 Cabinet ministers and there are plenty of people who are talented to step into their shoes,” he told BBC‘s Victoria Derbyshire. “It will not be a huge destabilisation.”

In a letter to Mrs May, Labour’s shadow Cabinet Office minister Jon Trickett called on the prime minister to either call in her independent adviser on ministerial standards to investigate, or “state publicly and explain your full reasons for why Priti Patel retains your confidence”.

However, Conservative MP Nadhim Zahawi – a member of the parliamentary foreign affairs committee – told BBC Two’s Newsnight that he believed some of the criticism facing Ms Patel was down to the fact she was a pro-Brexit campaigner during the EU referendum.

He said Ms Patel was not having “clandestine” meetings with “an enemy state” and that the Foreign Office was made aware of the meetings while she was in Israel.