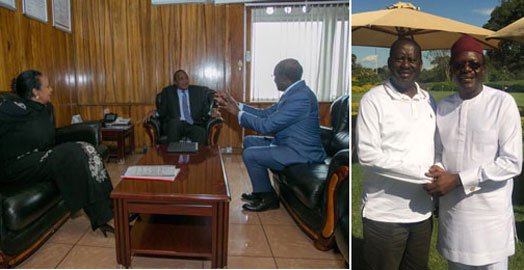 Most Kenyans lauded Dr Kituyi, who is the Secretary-General of the United Nations Conference on Trade and Development (UNCTAD), for his efforts to reunite the country through its top leadership.

Dr Kituyi posted two photos of the meetings on his Twitter handle with a captioning saying the county needs to heal.

He went on thank President Kenyatta and Mr Odinga for giving him an audience.

I thank Pres @UKenyatta & R.H. @RailaOdinga for according me an audience on our country’s state. Kenya’s bright future will be unlocked by leaders transcending entrenched positions even to the displeasure of some of their ardent followers. Give #Kenyans hope 4 a healing New Year

“At this moment Kenya looks up to statesmen who will stand up to be counted for good of the country. Thank you Mukhisa for the initiative!” added @CMwabili.

“That`s a healthy political move Dr. Mukhisa; but when you`re done with international assignment, we`ve something for you back home…..true Leadership,” commented @ENatembea.

“There should be mechanism to ensure a free, fair, transparent and verifiable Elections in the future! That’s the only way Kenya will heal,” @ISAACONIM wrote.

“Where were you when the elections were bungled? By this post alone shows how selfish you are. Peace makers don’t advertise my fren. Yours is attention seeking. Period!” @Fred45928493 stated.