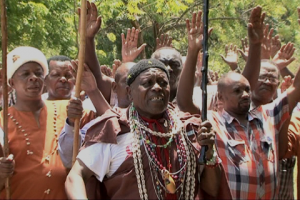 The Gikuyu Council of Elders have today held an elaborate traditional prayers in Mtwapa Township in the county of Kilifi ostensibly to seek God’s intervention in having the Deputy President William Ruto and radio journalist Joshua Arap Sang case at the International Criminal Court (ICC) terminated.

They observed since President Uhuru Kenyatta’s case collapsed late last year, there has been simmering disquiet over the fate of Ruto’s case.They called on the ICC to follow suit and stop the deputy president’s case in the ‘interest of nation- building, peace and unity’.

On December 5, 2014 ICC prosecutor Fatou Bensouda withdrew charges against Kenyatta for lack of sufficient evidence to proceed with the case to full trial.READ MORE