Video:Kibaki ‘alert and talking’ in a top S Africa hospital 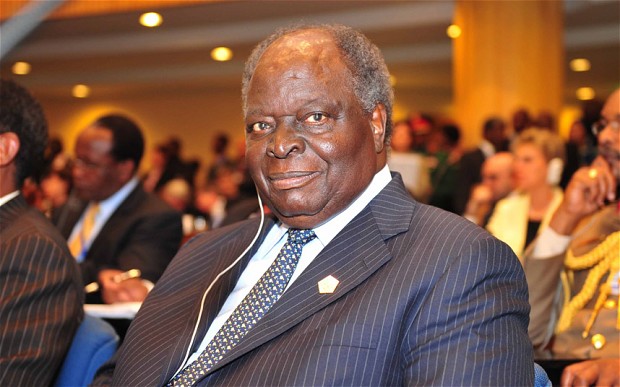 Kibaki ‘alert and talking’ in a top S Africa hospital

Former President Mwai Kibaki was on Sunday admitted to the Netcare Sunninghill Hospital in Johannesburg, South Africa after he was taken ill on Saturday.

A source familiar with his condition told the Daily Nation that Mr Kibaki was “awake and talking” after suffering what is believed to have been a stroke on Saturday night.

Sunninghill is a specialist heart hospital and on Monday doctors were said to have stabilised Mr Kibaki and were carrying out tests to establish how to treat him.
Mr Kibaki is in Aloe Ward on the hospital’s second floor. Kenyan security personnel have been deployed at the hospital and Kenyan embassy vehicles could be seen at the parking. The hospital would not comment on the retired President’s health.

The retired President, 84, was rushed to Karen Hospital where he was treated overnight and flown to South Africa by an Amref Flying Doctors air ambulance on Sunday, accompanied by his personal physician, Dr Dan Gikonyo.

Netcare Sunninghill Hospital is described as a top cardiology hospital in Johannesburg and boasts of the best medical teams and care for its high-end patients, according to its website.

“Cardiology has become synonymous with the name Netcare Sunninghill Hospital,” the website says.

“The high technology and expertise of our cardiologists ensures that our cardiac patients receive world-class treatment,” it adds.

The hospital has 279 beds and works with about 100 independently operating doctors.

The Netcare Ltd operates and manages the largest hospital and doctor network in the world outside of the United States of America, according to the group.
Patients requiring complicated cardiac interventions have been part of live workshops that have been beamed to national and international cardiac congresses.”

The hospital is renowned for its 24 hour accident and emergency unit.

It houses the Netcare Renal Unit, the Brain Lab, the Sleep Lab, the Pelvic and Urotherapy Centre, among others. Expert specialists of all disciplines of medicine practice on the premises.

According to a source at the Karen Hospital, Mr Kibaki was in “bad condition” and needed specialised treatment.

The former President was flown to Johannesburg, South Africa through the Wilson Airport in the company of his doctor.

At the time of his transfer to the airport in a guarded Amref ambulance, Mr Kibaki is said to have been in a stable condition, compared to how he checked in the previous night.

“From how we assess patients who come in for emergency care, we can say he was in a good condition,” said the source.

Explaining why Dr Gikonyo, the former president’s personal doctor had to accompany his patient (Mr Kibaki), the source said: “Information about the kind of treatment he had received while at Karen Hospital and the state he was in could only be handed over to the recipient hospital in person.

“Hospitals do not accept medical records in the absence of the doctor who took care of the patient. That is why his personal doctor had to travel with him,” explained the source who asked not to be named because they are not allowed to speak to the Press.

Amref Flying Doctors is a well-known international air ambulance services provider which operates a fleet of 14 fully-equipped air ambulances, 11 of which are leased from Phoenix Aviation.

“We have been in the Aeromedical transport industry for close to 60 years, acquiring a huge wealth of experience, professionalism and solid infrastructure,” reads an excerpt on its website.

Video:Kibaki ‘alert and talking’ in a top S Africa hospital Reviewed by samrack on August 23, 2016 .

Share thisFacebookTwitterPinterestEmailWhatsAppKibaki ‘alert and talking’ in a top S Africa hospital In Summary On Monday, doctors were said to have stabilised Mr Kibaki and were carrying out tests to establish how to treat him. He was rushed to Karen Hospital where he was treated overnight and flown to South Africa by an Amref Flying Doctors