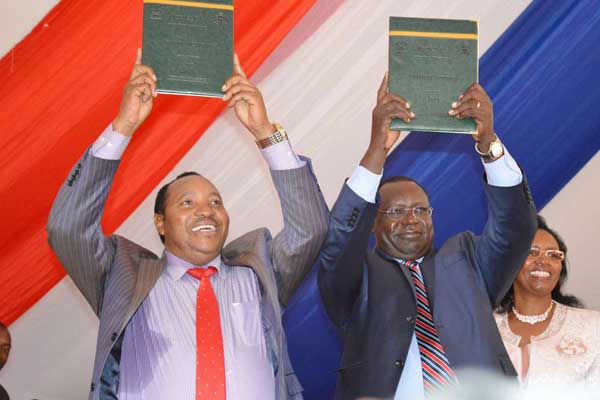 Kiambu Governor Ferdinand Waititu (left) and his deputy James Nyoro during their swearing-in ceremony on August 19, 2017. Dr Nyoro took over the reins of power after Mr Waititu was charged with graft. PHOTO | FILE| NATION MEDIA GROUP

Kiambu County Assembly has approached the Supreme Court seeking an advisory opinion whether terms of bail can be imposed that are tantamount to suspending a governor from office by way of denying him access to office.

The MCAs are aggrieved that a court order issued in July barred Governor Ferdinand Waititu from accessing Kiambu offices or performing functions as county boss pending the determination of his trial before the anti-corruption court.

“The continued barring of the elected governor of Kiambu from accessing his office for a number of months has made it impractical to perform his duties which entail a key role in the management and operations of the affairs of the county government.

“The operations are now on the verge of total collapse and complete paralysis,” lawyer Wilfred Nyamu said in court papers.

The Constitution provides certain functions which are within the specific and mandatory purview of a governor and which functions cannot be delegated to the deputy governor.

Currently, the county public service board has only two members instead of the required seven members as the term of the previous board members expired and it is only the governor who can nominate and appoint their replacement under the Constitution.

“This has created unprecedented adverse challenges as the board cannot meet owing to lack of requisite quorum. That as long as the governor stays out of office, there cannot be recruitment or renewal of contracts in respect of county staff,” lawyer Nyamu said.

There is currently a need of approximately 800 nurses who were expected to be hired with the completion of various hospitals in the county and over 200 county casual workers.

Further, key ministries in the executive committee namely roads, ICT and communication, municipalities, urban development and public service are vacant as they have no chief officers.

Chief officers act as accounting officers in their respective ministries.

“The deputy governor can neither appoint them nor reassign anyone to those vacant positions as the responsibility solely lies with the governor by virtue of the constitutional,” lawyer Nyamu said.

Kiambu deputy governor James Nyoro, who took over office, reshuffled the county executive committee of Kiambu, but his move was contested in the Labour court.

The court ruled that a deputy governor has no power or authority to interfere with the membership of the county executive committee as appointed by the governor.