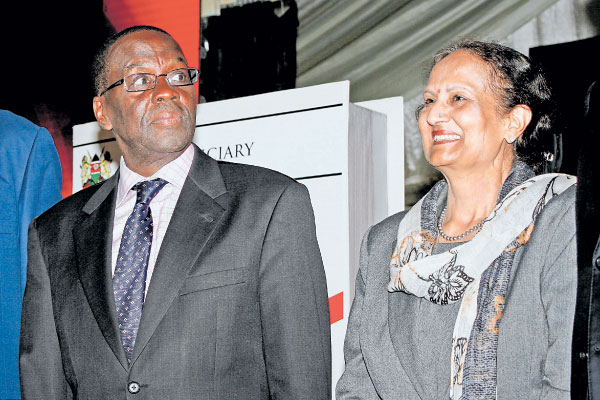 President Uhuru Kenyatta will have a big latitude on who becomes the next Chief Justice and Deputy Chief Justice after the law was changed to allow him to receive  three names for each seat.

Unlike in 2011 when the JSC presented the President with only one name, this time, the Judicial Service Act has been amended and the commission will now forward three names.

The President will then pick one for National Assembly to vet.

The amendments were contained in The Statute Law (Miscellaneous Amendments) Bill, 2015 that was signed by President Kenyatta into law early this month.

The changes come as 2016 heralds’ a change of guard at the Judiciary. Chief Justice Dr Willy Mutunga is set to retire and two positions of the powerful Judicial Service Commission will come up for replacement.

Dr Mutunga is set to leave in June while Law society of Kenya will hold elections in February to either reconfirm or replace one if its representatives in the Judicial Service Commission Florence Mwangangi. The Supreme Court will also be replacing Dr Smokin Wanjala in June 2016.

Attorney General Githu Muigai, who sits in the commission said the process to recruit a new chief justice has not been commenced as Dr Mutunga would be expected to communicate his intentions formally or for his term to expire.

“I am aware that the Chief Justice has intimated to the commission that he would wish to leave mid next year.

The commission has, however, not received formal communication and it would be premature to make any plans for recruitment,” said Prof Muigai.

Despite the imminent changes at the JSC, the pestering issue of Deputy chief Justice Kalpana Rawal’s retirement won’t just go away. This month, the High Court dismissed a petition by Justice Rawal who had sought to have it affirm that she should retire when she clocks 74 years.

Justice Rawal argues that she was appointed under the old constitution where the retirement age was placed at 74. Under the 2010 Constitution, judges should retire at 70. As per the Constitution, therefore, Rawal is set to leave in March 2016.

She has filed an appeal at the Court of Appeal.

In her appeal, she argues that the judges at High Court failed to appreciate Section 31 of the Sixth Schedule which allows judges appointed under the independence constitution to serve until they are 74.

The Section provides: “Unless this Schedule provides otherwise, a person who immediately before the effective date, held or was acting in an office established by the former Constitution shall on the effective date continue to hold or act in that office under this Constitution for the unexpired period, if any, of the term of the person.”

But High Court judges Richard Mwongo, Weldon Korir, Christine Meoli, Hedwig Ong’udi and Charles Kariuki on December 11 ruled that Justice Rawal had bound herself to abide by the 2010 Constitution when she took a fresh oath of office and dismissed her case challenging her retirement age.

Her retirement now remains in abeyance and may rock the succession plan for the Chief Justice.  JSC had already started seeking a replacement for Justice Rawal.

Six women had shown interest in the seat.

As per the law, the Judiciary informs a judge that they are up for retirement six months before due date. The JSC then moves to advertise and fill the position before the time.

“If you wait to fill the term after they leave you will have an interregnum which may offend the Constitution,” said  a JSC member Professor Tom Ojienda.

In February 2016 the LSK said it will go to elections to elect a representative in JSC. Ms Florence Mwangagi will be defending her position against lawyers Mary Kigen, Mercy Mwara, and Njeri Onyango have shown interest in the seat. The lawyers are already lobbying their peers.

Justice Wanjala is expected to fully participle in the selection of a new Chief Justice as he will be replaced around the same time with the CJ.

Key changes expected in Kenyan Judiciary next year Reviewed by samrack on December 27, 2015 .

Chief Justice Willy Mutunga with his deputy Kalpana Rawal at a past function. FILE PHOTO | NATION MEDIA GROUP Key changes expected in Kenyan Judiciary next year Unlike in 2011 when the JSC presented the President with only one name, this time, the Judicial Service Act has been amended and the commission will now forward three