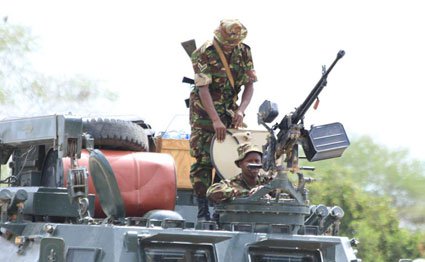 Mr Kenyatta said the African Union Mission in Somalia (Amisom) must be supported to deliver on the ultimate goal of ensuring Somalia is safe.

He said the European Union has supported Amisom peacekeeping forces and the UN should do more to help the Somali Government and people.

“The EU has worked hard and its work is appreciated but, ultimately, the UN has a responsibility to support the mission,” he said.

TERRORISM
President Kenyatta spoke at the 26th session of the Governing Council of UN-Habitat at Gigiri, Nairobi.

He said that with adequate resources, the fight against terrorism would take a shorter time to achieve the intended results.

President Kenyatta’s comments come ahead of the May 11 Third London Conference on Somalia, which he is scheduled to attend.

The Head of State also held talks separately with the President of the United Nations General Assembly, Mr Peter Thomson, over the matter.

The President also spoke about the security situation in South Sudan, telling Mr Thomson that the United Nations Mission in South Sudan (Unmiss) needs to be reorganised and realigned to meet its responsibility effectively.

“This should be done as soon possible in order to set the pace for the process of stabilising South Sudan,” he said.

URBANISATION
The President said there was a need for collaboration to tackle housing challenges in urban centres that have been made worse by increased population of people seeking opportunities.

“One of the innovations of the New Urban Agenda is the reinforced dialogue between central and local governments,” Dr Clos said.
He said UN-Habitat has more than 40 years of experience in urbanisation.

Kenyatta seeks UN assistance in stabilising Somalia Amisom Reviewed by samrack on May 8, 2017 .