Kenyatta-Odinga blood feud would be best umpired by UN 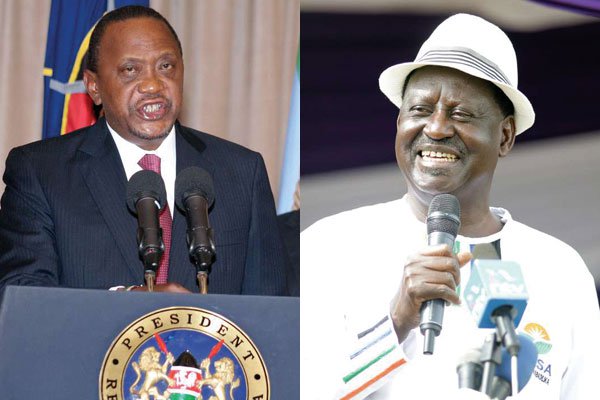 Combined photos, from left: President Uhuru Kenyatta addresses the nation on the Supreme Court ruling, at State House, Nairobi, on September 21, 2017. Nasa leader Raila Odinga addresses mourners during the burial service of Maurice Odhiambo in Ujunga, Siaya County, on September 23, 2017. The ordinary people have nothing to gain from either a Kenyatta or Odinga presidency. PHOTOS | DENNIS ONSONGO AND TONNY OMONDI | NATION MEDIA GROUP

Kenyatta-Odinga blood feud would be best umpired by UN

I don’t know how long we’ll keep reminding ourselves that when two bulls fight it is the grass the grass that suffers.

President Uhuru Kenyatta and his ‘elder brother’ Raila Odinga are the bulls engaged in a dynastic feud that again threatens to tear the country apart.

The rest of us are the grass being trampled underfoot.

The biggest tragedy is that we are not innocent victims but willing participants in a destructive struggle in which we are just cannon fodder.

The so called ‘uthamakism’ that drives Mr Kenyatta’s Kikuyu hordes into delirium is not about the community but about a small family cabal whose only ideology is primitive accumulation.

As for the Luo ‘Odingaism’, on the other side, the name aptly describes it. It is also a family enterprise.

The ordinary Kikuyu or Luo peasant, labourer, farmer, prostitute or hawker has absolutely nothing to gain from either a Kenyatta or Odinga presidency.

He or she will not get privileged entry to State House, plum public service postings, cash-filled briefcases or first go at lucrative government tenders.

The mindless youth being used to violently block roads and light bonfires on behalf of President Kenyatta or Mr Odinga will have their share of excitement and danger but, come nightfall, retreat to precarious, lonely and hungry existence in their crumbling, dirty, unsanitary shacks.

Meanwhile, their leaders will be quaffing champagne in fortified castles, complete with police detachments briefed to keep at bay unwanted clansmen.

EDUCATION
This mindless obeisance to tribal chieftains is not the preserve of unschooled rural peasants or urban proletariat whose worldview does not extend beyond the immediate village or slum.

It is actually driven by educated fools, many of whom attended the most cosmopolitan public schools such as the Alliances, Nairobi, Kenya High, Starehe, Lenana, and State House Girls, or the most expensive private academies, before moving on to university in Kenya or abroad.

Many have actually done extensive stints studying and working in Britain, Germany, the United States, France, South Africa and other favourite destinations for the Kenyan diaspora.

Despite all that education and exposure, however, their minds remain captive to primitive ethnic loyalties that one must wonder what witchcraft or mind-control drugs Mr Kenyatta and Mr Odinga might have used on them.

ELECTION
Now, after the Supreme Court nullified the presidential election results, we approach a fresh poll facing serious threat of political violence because two pig-headed contenders each think they have an inborn right to the national title deed.

Each of them, unfortunately, has at his beck and call mindless hordes to be unleashed into battle at the service of causes that have no rhyme or reason.

Mr Odinga is justified in insisting that the same electoral commission found by the Supreme Court to have wilfully bungled the August 8 election cannot be entrusted with the repeat poll.

However, plans to lead a mob attack on the IEBC offices or threats to block the elections altogether are pure brinksmanship.

SUPPORTERS
Mr Odinga is free to boycott the polls, and with that spurn the chance to prove that he was the rightful winner the first time around.

What he does not have is the power to stop the election.

Mobs may throw stones and light bonfires but that will be limited to a few trouble spots.

And he must not underestimate the capacity and willingness of President Kenyatta to unleash his own lawless ethnic mobs — outside the official security apparatus — as we are increasingly seeing.

REPRESSION
Just as dangerous as Mr Odinga’s ‘no election’ threat is President Kenyatta’s attacks on the Judiciary.

History tells us that tyranny and dictatorship starts with emasculation of all independent voices, watchdog institutions and other arms of government.

From Napoleon Bonaparte to Adolf Hitler, and Idi Amin to Macias Nguema, we know.

Mr Kenyatta seems to have taken inspiration from such notorious fellows.

He started with assaults on independent media and civil society and now has set a malevolent eye on the Judiciary.

Dictatorial tendencies must be stopped before they take root.

In the meantime, we have an election that must be held before the end of next month.

Since we have no other credible election management body, I would suggest that we temporarily cede sovereignty to the United Nations for the sole purpose of managing the election.

Kenyatta-Odinga blood feud would be best umpired by UN Reviewed by samrack on September 25, 2017 .

Combined photos, from left: President Uhuru Kenyatta addresses the nation on the Supreme Court ruling, at State House, Nairobi, on September 21, 2017. Nasa leader Raila Odinga addresses mourners during the burial service of Maurice Odhiambo in Ujunga, Siaya County, on September 23, 2017. The ordinary people have nothing to gain from either a Kenyatta