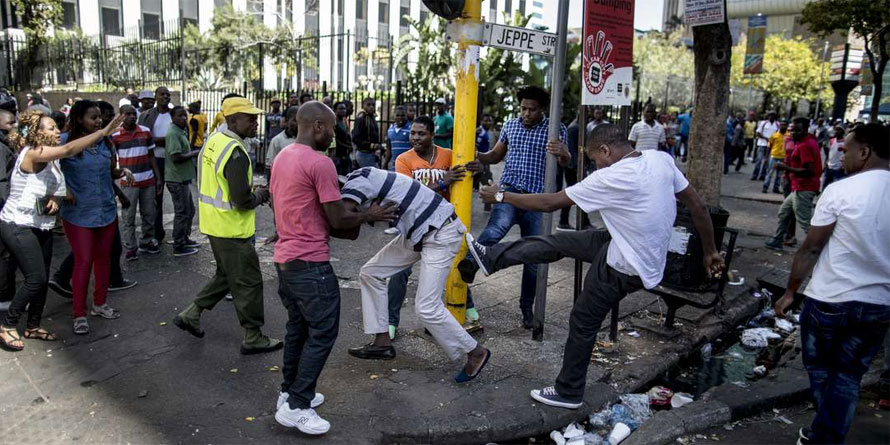 A TAXI DRIVER IS BEATEN BY A MOB DURING ATTACKS TARGETING FOREIGN NATIONALS IN THE JOHANNESBURG CENTRAL BUSINESS DISTRICT IN APRIL 2015. FILE PHOTO | NMG

Kenya has issued a travel warning against South Africa, citing a rising wave of crime in a move that may spark a fresh round of diplomatic showdown.

“The most worrying element of this crime wave is the rising number of incidents of attacks within the vicinity of hotels,” Dr Juma says.

“In addition, the diplomatic community is being openly attacked in residential areas and in the central business district.”

The letter further blames South African authorities for failing to stop the wave of attacks despite the crime reports being filed with the police.

The letter, copied to Head of Public Service Joseph Kinyua, is shared with all principal secretaries, governors, MPs, senators, Members of County Assemblies, the Solicitor-General and chief executives of independent commissions and agencies.

“We need to bring to the attention of all official delegations or members of public travelling to South Africa on duty or official assignments to be cautious,” the letter says.

South Africa has grappled with sporadic but violent xenophobic attacks since 2008 as its army of uneducated youth blame foreigners for the high level of joblessness.

To minimise chances of xenophobic attacks, Dr Juma has advised Kenyans to arrive in South Africa before 6 p.m., book accommodation in well-established areas and avoid travelling in public service vehicles.

The letter is dated April 24, the same day the United Kingdom issued a travel advisory against South Africa.

“There is a very high level of crime, including rape and murder in South Africa,” the UK says in its travel warning.

“The most violent crimes tend to occur in townships, remote and isolated areas and away from the normal tourist destinations. Most visits to South Africa are trouble-free, but you should take sensible precautions to protect your safety.”

Canada has also issued a travel advisory against South Africa. On May 2, the North American state said it had not issued a nationwide advisory for South Africa but warned its citizens “to exercise a high degree of caution due to the significant level of serious crime.”

For Kenya, the alert is likely to rekindle old diplomatic fires.

In 2014, South Africa angered the East African nation when it introduced a Sh5,850 visa application fee for Kenyan travellers.

Under the rules that Nairobi threatened to match with equally tough measures, visa processing time was also extended to at least seven working days and travellers visiting for more than 30 days asked to pay additional Sh4,800 fee.

Hundreds of Kenyans live and work in South Africa, which is also an important trading partner of Kenya.

The tough immigration rules and xenophobic attacks saw Kenya’s exports to South Africa drop from Sh4.35 billion in 2015 to Sh4.15 billion last year. Imports from South Africa dropped sharply by 31.7 per cent, from Sh61.3 billion to Sh41.86 billion over the same period.

She also wants Kenyans to avoid displaying their cellphones, jewelry and travel documents “as these attract attention and may result in possible attacks.”

Kenya’s travel advisory may revive diplomatic row with SA Reviewed by samrack on May 8, 2017 .

Share thisFacebookTwitterPinterestEmailWhatsAppA TAXI DRIVER IS BEATEN BY A MOB DURING ATTACKS TARGETING FOREIGN NATIONALS IN THE JOHANNESBURG CENTRAL BUSINESS DISTRICT IN APRIL 2015. FILE PHOTO | NMG  Kenya’s travel advisory may revive diplomatic row with SA Kenya has issued a travel warning against South Africa, citing a rising wave of crime in a move that