Kenya’s mobile phone penetration crested the 100 per cent mark, says the Communications Authority of Kenya. It joins Morocco, Namibia and Tunisia, the only countries in Africa to achieve the milestone.

The first quarter sector statistics report for the financial year 2018/2019 by CA shows that the mobile penetration – the total number of active SIM cards calculated as a percentage of total population in the country – rose by 2.3 percentage points to stand at 100.1 per cent from 97.8 per cent reported last quarter. 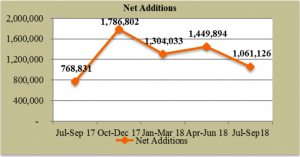 The increase in mobile penetration was “mainly attributed to the fact that most users own more than one SIM card either from the same or different service providers,” says CA.

This is supported by Kenya Integrated Household Budget survey released in April by Kenya Bureau of Statistics which indicates that at least 30 per cent of mobile users in Kenya own more than one SIM card, translating to an average of 1.3 SIM cards per subscriber.

There were 46.6 million active mobile subscribers between July and September, a 2.4 per cent increase compared to April – June period. 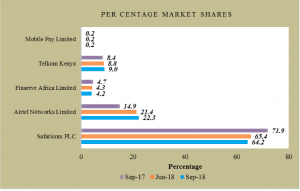 During the period under review, there were 1.06 million net additions in mobile subscriptions.

Sema Mobile, a mobile virtual network operator that is 50 per cent owned by Mobile Decisioning (MODE), exited the market during the period.

US warns on Tanzania travel due to ‘crime and terror’

US warns on Tanzania travel due to 'crime and terror'