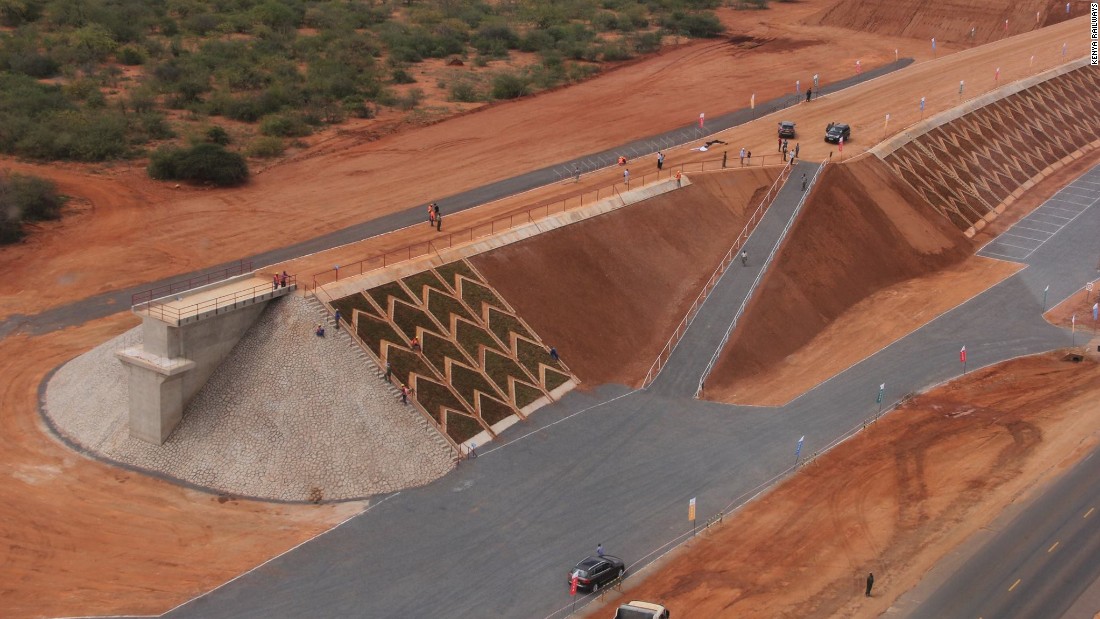 (CNN) —It’s been billed as the most ambitious project in Kenya since it gained independence in 1963.

Originally planned to link Mombasa and Nairobi, the decision was made to extend the line to the market town of Naivasha in 2015, and 75% of civil works have reportedly been completed. This first Mombasa-Nairobi stretch will be completed by June 2017, consulting firm CPCS told CNN.

It is hoped that the track will shorten the journey between the two cities from 12 hours to four hours. Passenger trains will travel at 120km/h, and freight trains will be able to carry 25 million tonnes per year, according to the International Railway Journal.

Eventually, the East Africa Railway Masterplan will link Mombasa with other major east African cities such as Kampala, in Uganda, and Juba, in South Sudan.

The East Africa Railway Masterplan is being managed by the East Africa Community; an intergovernmental organization of six partner states; Burundi, Kenya, Rwanda, South Sudan, Tanzania, and Uganda, which aims to create a politically united and secure East Africa.

Management consulting firm CPCS advised the East Africa Community on the financial, legal and economic impact of the project.

The railway is being built by the state-owned China Road and Bridge Corporation (CRBC), 90% of the ongoing development of the Mombasa-Nairobi section is being financed by The Export-Import Bank of China.

The hope is that this new railway will reduce congestion on Kenya’s crowded road network, and promote tourism.

This railway is the most expensive of a series of construction projects in Africa.

According to Deloitte, more than $131 billion was spent on transportation construction on the continent in 2015; by 2025, $200 billion is expected to be spent on the continent’s roads, and another $7 billion dollars on African airports.

China has been investing in other projects in Africa, including a mega port in Lamu, Kenya, and a manufacturing zone in Ethiopia.

Controversy has not been absent, however, from the new railway: initially, the proposed route would cut into Nairobi’s wildlife sanctuary.

A deal was made between wildlife officials and the Kenyan government, according to the Guardian, that the track would be walled off.

It remains to be seen if the railway will have as big an economic impact as predicted.

In November 2013, Kenyan president Uhuru Kenyatta laid the foundation stone for the construction, telling local media; “The project will define my legacy as president of Kenya. What we are doing here today will most definitely transform… not only Kenya but the whole eastern African region.”

Share thisFacebookTwitterPinterestEmailWhatsAppKenya’s $13 billion railway is taking shape (CNN) —It’s been billed as the most ambitious project in Kenya since it gained independence in 1963. Now, the first section of the east African nation’s $13.8 billion railway is nearly finished. Originally planned to link Mombasa and Nairobi, the decision was made to extend the line