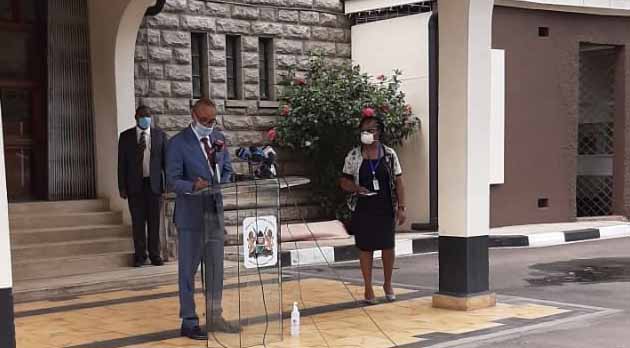 The Foreign Affairs Ministry has said Kenyans who die abroad will be buried there as government tightens restrictions in the fight against coronavirus.

Speaking during a Press briefing on Tuesday, Foreign Affairs PS Macharia Kamau said it will not be possible to bring the bodies home due to the COVID-19 situation.

“We also request Kenyans to bear with us to bury those who die in the diaspora within 24 hours,” he said.

He further revealed that Ruth Anyango Ogonda, the Kenyan administrative attaché who died in Los Angeles, had been battling with high blood pressure but cause of death is yet to be established.

According to him, the ministry is still waiting for postmortem results from Olympia Medical Centre.

He said she has left behind two children: “What is tragic is that we are not able to bring them home under the circumstances, but we will ensure they are kept under the best conditions in Los Angeles.”

The PS also said five Kenyans have died in the U.S. in the last one month ‘not necessarily because of COVID-19 but issues related to the situation.’

He opined that the situation is likely to continue for at least three to six months.

Reports reaching the ministry indicate that in Hungary, there are 21 students stranded while in France more than 60 trainees are in a similar situation.

“We have very many Kenyans working in the Middle East, a significant number have lost their jobs. We are in touch with all governments and we are urging them to take care of Kenyans in their countries,” he said.

The Foreign Affairs PS also revealed that one Kenyan is in ICU in Sweden after contracting coronavirus.

He said the official number of Kenyan citizens abroad is over 2.8 million with 64 stranded in India after they travelled to seek treatment.

An additional 160 who were there to accompany their sick relatives are also stranded while in Iran, over 200 students have not been able to attend school.

With regards to the situation in China, Amb. Kamau said there are approximately 3000 Kenyans there but no reports of death.

He however acknowledged having received reports of discrimination and eviction of Africans from their homes and hotels.

“The situation in Guangzhou has been a concern to us. The reality is that this has been an unfortunate outcome,” he said.

The PS reiterated that the African Union has responded collectively on the matter and that the Kenyan Government was consulted when the statement was made.

He affirmed that the situation in China is stabilizing adding that: “It is really important they (Africans) cooperate with the government of China in adhering to the rules that have been put in place like testing and other rules.”

China has since reported that 111 Africans in Guangzhou tested positive for COVID-19 as of Monday.

Kenyans who die abroad to be buried there as Gov’t tightens restrictions over COVID-19 Reviewed by samrack on April 24, 2020 .