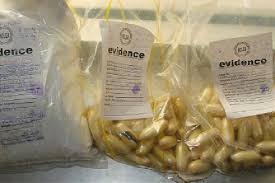 The Kenyan man swallowed cocaine weighing 1.2 kilograms, which were in 68 packets. FILE PHOTO

A Kenyan man was stopped at Bangkok’s airport for allegedly trying to smuggle more than 60 packets of cocaine in his stomach, Thai authorities announced Wednesday.

Authorities said Glenn Chibasellow Ooko, 43, had flown on Monday from Ethiopia to the Thai capital’s Suvarnabhumi airport, where he was detained.

An x-ray showed dozens of oblong items in his stomach, which were filled with cocaine, according to photos provided by the Office of the Narcotics Control Board.

“He swallowed cocaine weighing 1.2 kilograms, which were in 68 packets,” the ONCB announced in a statement Wednesday.

Ooko was arrested along with Nigerian national Osita Joseph Ukpa, who police said had hired the Kenyan to smuggle the drugs.

“This is part of a drug network in Thailand,” the statement said.

Thailand has long been a major drug smuggling hub, with its porous borders and lax law enforcement making it easier for transnational crime networks to transport their goods.

The country also serves as a transit point for a multi-billion methamphetamine trade route, smuggled through Myanmar and Laos before moving on to countries like Australia and Japan.

Kenyan who swallowed 68 cocaine packets arrested in Thailand Reviewed by samrack on August 21, 2019 .