by samrack
in Africa, Kenya, News, Somalia, War on Terror
A A
0 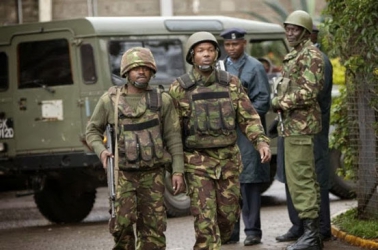 Garissa, Kenya – Kenyan security forces thwarted a planned attack by Al Shabaab gunmen on a village in Fafi constituency at the Kenya-Somalia border.
There are claims the gunmen had tried to hoist their flag there but Interior Ministry spokesman Mwenda Njoka said Kenyan security forces thwarted the attack after a fierce shootout. He said a gang of armed Ugus militants was sighted at around 6p.m. Thursday by members of the public who alerted security forces. Security forces swiftly mobilised and engaged the militants in a gun battle. “Security forces on Thursday evening thwarted an attempted attack at Yumbis village of Fafi Constituency by suspected Al Shabaab militants (or Ugus as the group is referred to by Somali Government, which translates to: the group that massacres Somali people),” said Njoka. Locals had earlier on reported that the gunmen had taken over installations and tried to hoist their flag. The incident happened in Yumbis and Welmarer in Fafi location in Garissa County. See also: Kenya blocked UN anti-terrorism team tracking Al-Shabaab, says report Friday, Njoka urged Kenyans to continue collaborating with security agents to ensure that members of the group who might have taken refuge among innocent locals are flushed out.

This comes two days after al Shabaab crossed into Kenya from Somalia, and went to “preach” for two hours in a Mosque in Ijara warning the Mosque leaders from exposing sympathisers. They were led by wanted Al shabaab leader Mohamed Kuno alias Gamadhere. Gamadhere comes from Garissa County and a bounty is on his head for anyone who will help capture him. He has been linked to the Garisssa university attack on April 2 in which 148 people were killed by terrorists.
Read more at: http://standardmedia.co.ke/article/2000163118/kenyan-security-forces-avert-planned-terrorist-attack-on-a-village-in-garissa

Four Reasons Why Diaspora Life Can Be Depressing [VIDEO]