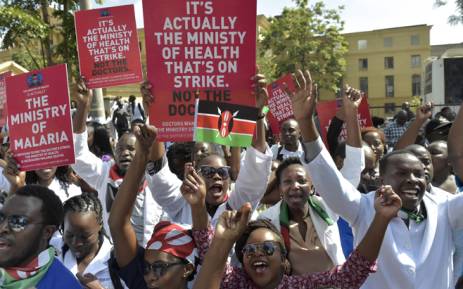 Kenyan doctors shout slogans and hold placards outside a Nairobi court on 26 January, 2017 as they awaited for their union officials to come out. A Kenyan court gave doctors and nurses five days to end a crippling nationwide strike, reneging on an earlier threat to jail union officials. Picture: AFP.

NAIROBI – Doctors in Kenya’s private healthcare system will walk out from midnight in protest at the jailing of some of their colleagues for striking at public hospitals, deepening a political crisis for President Uhuru Kenyatta.

“Further instructions will be issued should the doctors still be in jail at the expiry of this period,” she said, calling on colleagues to demonstrate at courts around the country in solidarity.

Officials from a union that represents doctors were jailed on Monday for contempt of court after they refused to call off the public hospital strike, which has entered its third month. The court had ruled the strike, in protest at pay and working conditions, was illegal.

Kitulu said there would be no negotiations while the union officials were in jail, and demanded that Kenyatta, who faces presidential and parliamentary elections in August, sack cabinet members and officials she blamed for the crisis.

The 5,000-member doctors’ union wants the government to implement a deal agreed in 2013 to raise basic salaries by 150 to 180%, review working conditions, job structures and criteria for promotions, and address under-staffing in state hospitals.

A series of corruption scandals, including an investigation into millions of dollars allegedly missing from the Health Ministry, has bolstered support for the doctors, even as Kenyan media have reported that patients have died during the strike.

Private hospitals have been struggling to cope with an influx of patients who would normally use the cheaper public health service.

The private Bomu Medical Hospital in the coastal city of Mombasa has had to turn its waiting room into an extra ward to accommodate an overflow of patients.

But some like Patricia Kadzo, 31, were unable to afford the fees. She had camped out for two days next to her frail father, who was sleeping on a worn-out mattress in a corridor as she tried to gather money for an operation on his ruptured bladder.

“We are taking him home. We can do nothing because we don’t have money. Let him die there,” she said tiredly.

KENYAN PRIVATE DOCTORS TO STRIKE AFTER COLLEAGUES JAILED Reviewed by samrack on February 14, 2017 .

Kenyan doctors shout slogans and hold placards outside a Nairobi court on 26 January, 2017 as they awaited for their union officials to come out. A Kenyan court gave doctors and nurses five days to end a crippling nationwide strike, reneging on an earlier threat to jail union officials. Picture: AFP. KENYAN PRIVATE DOCTORS TO