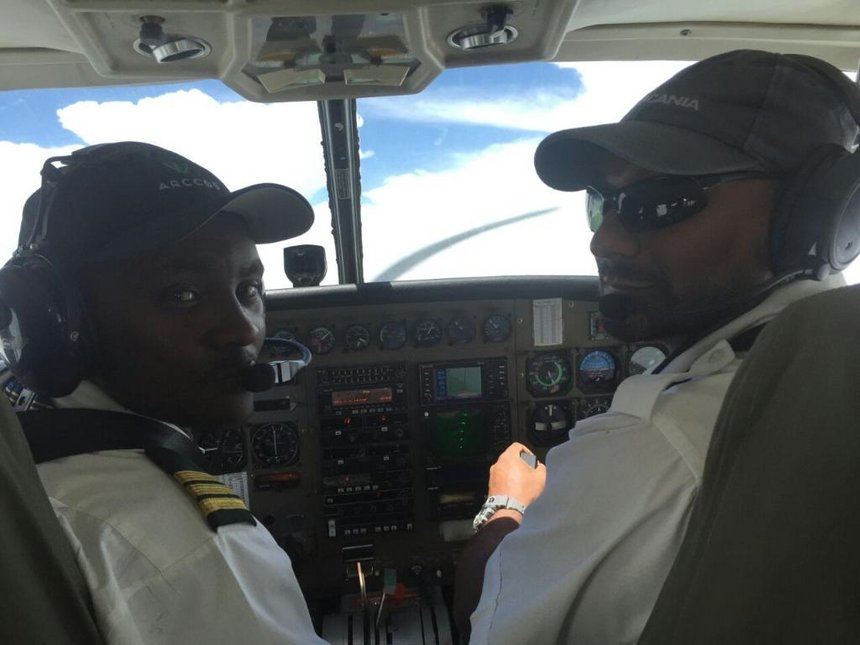 For three years now, Brian Migwi, 25, has been flying over what one would say is the most dangerous airspaces in Africa.

With a group of pilots from Aeronav Air Services, these Kenyans have taken a big risk and confidently dominated the Somali airspace.

Migwi, who currently commands a caravan, got his licence when he was 17 years and in Form 3.

“I never had a holiday while in high school, since every time schools closed, I would immediately start training at the Wilson Airport,” he said.

Migwi had developed an interest in flying while in Form 1 at Pioneer School in Muranga, which offered flying lessons.

While he was training, Aeronav, which is a sister company to the Kenya School of Flying, noticed his interest and gave him an opportunity after he cleared his secondary education.

Aeronav would then get into a partnership with Salam Air Express, a Somali airline, and Migwi was asked to start flying in Somalia, an offer he took when he was 22.

Migwi says the pilots experienced many security threats in the line of duty, but he is quick to add that he is not ready to leave the volatile country for any other job.

“So many times I have asked myself: What keeps me here? And I never come up with a solid answer. I then concluded that this is my life. It’s not the life that I choose but the life that chose me, literally. I am not ready to leave Somalia, not in the next four years,” he said.

According to him, flying in any other place wouldn’t be as exciting as Mogadishu is. “It’s fun here. The runway is messy, no control room, it’s not like Nairobi, where someone sees you while you are as far as Mombasa. No radar cabin, you cannot come in at night. I mean it’s a challenging environment and you have to get your way,” he explained.

Such things, he says, keep him going. “I will continue flying here. I am only 25, so let me enjoy this craziness where each day is the same but again totally different. I would fly here in my next life,” he joked.

The pilots have been flying to some of the most remote villages in Somalia, where they deliver medicine, food and sometimes medics for the Amisom troops.

“There are times when we are called upon to carry injured soldiers and take them to Mogadishu for treatment,” said Aeronav manager Charles Wachira, adding that they sometimes transport soldiers from one point to the other.

“Like this morning, we transported medicine from Red Cross to an area which had just been hit by al Shabaab,” Wachira said.

business has been good, although there are areas of improvement.

“As a whole, it’s been a good experience, despite security threats, poor infrastructure and aviation teething problems in this country.”

He confirmed there is a huge demand for flights in Somalia and their crew is rarely on the ground. “We operate mostly three aircrafts, and we fly from morning to evening to different parts of Somalia,” he said.

They at times find people shooting aimlessly in the air, but none of their aircraft has ever been brought down.

“So yes, security here is an issue, but we have to do what we have to do. Someone has to do it, and in this case, it happens to be us,” Migwi said.

The worst experience Migwi has had is when he had a puncture at a remote village some 150 miles North West of Mogadishu, at a place called Huddur, which was an al Shabaab hotspot in 2012.

“You can imagine the Loiyangarani of Somalia. I spent three days there, since even getting an engineer to come to my rescue was hectic. But I thank God I came out of it unhurt and even stronger.”

Despite the challenges, Wachira prides in the fact that they have helped open up Somalia.

“It feels good to be associated with something small that is growing. It gives a form of satisfaction,” he said, urging others who can help build Somalia to give their input.

“Al Shabaab don’t want to see growth in their country, and it’s very unfortunate. It would be good to see more Kenyans coming in here and making a contribution,” he concluded.

Kenyan pilots brave deadly Somalia skies For three years now, Brian Migwi, 25, has been flying over what one would say is the most dangerous airspaces in Africa. With a group of pilots from Aeronav Air Services, these Kenyans have taken a big risk and confidently dominated the Somali airspace. Migwi, who currently commands a