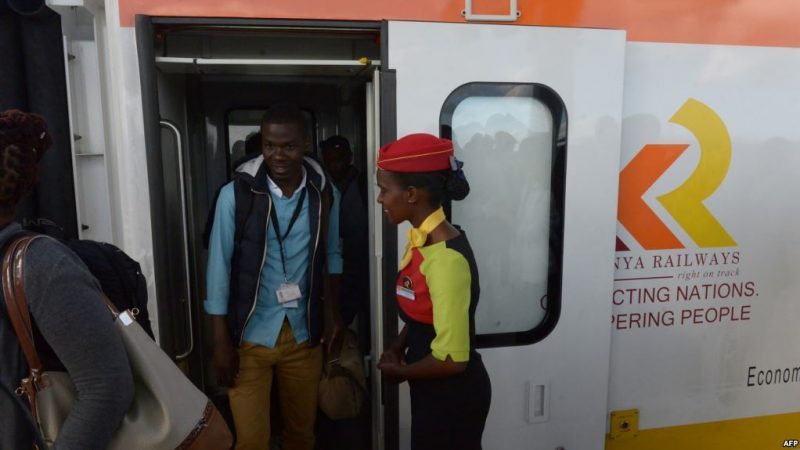 FILE – Passengers disembark upon arrival in a Mombasa-to-Nairobi train launched to operate on the Standard Gauge Railway (SGR), May 31, 2017. New details about a contract signed in 2014 reveal what’s at stake if Kenya defaults on its loan to the Export-Import Bank of China.

The Kenyan government is struggling to respond to revelations that a multi-billion dollar contract with China may imperil its sovereignty, according to The Daily Nation newspaper.

Details of the loan for the Standard Gauge Railway, Kenya’s largest infrastructure project since independence, emerged Sunday when The Nation published excerptsfrom a 2014 contract between the Export-Import Bank of China and the Republic of Kenya.

Beijing’s infrastructure deals typically unfold in secret, and The Nation’s reporting provides a rare glimpse into how China structures the terms of its loans.

Now, according to the paper, the government has canceled planned appearances and scheduled emergency meetings to determine how best to navigate the latest in a series of damaging reports about the SGR’s funding, construction and operation.

Of chief concern is language that details the scope of assets Kenya must forfeit if it defaults on the loan. According to an excerpt quoted by The Nation, Kenya’s largest independent newspaper, “Neither the borrower (Kenya) nor any of its assets is entitled to any right of immunity on the grounds of sovereignty.”

The contract also stipulates that Kenya must use Chinese “goods, technology and services” in the railway’s construction and operation, and a confidentiality clause prohibits the Kenyan government from disclosing the terms of the contract without Beijing’s expressed written consent.

The excerpts provide some of the most tangible evidence to date that Beijing may engage in what critics, including the United States, characterize as debt-trap diplomacy — lending designed to force countries into handing over land, minerals or strategic assets when they default.

The Nation didn’t reveal how it acquired the contract, nor how it determined its authenticity.

But language in the document closely matches contracts VOA uncovered for projects tied to the Belt and Road Initiative, China’s trillion-dollar global infrastructure plan, in Serbia, Kyrgyzstan and Guyana, suggesting the terms of the Kenya loan, from asset seizure and confidentiality clauses to stipulations about using Chinese vendors, may reflect Bejing’s lending practices across Africa, and beyond.READ MORE

Share thisFacebookTwitterPinterestEmailWhatsAppFILE – Passengers disembark upon arrival in a Mombasa-to-Nairobi train launched to operate on the Standard Gauge Railway (SGR), May 31, 2017. New details about a contract signed in 2014 reveal what’s at stake if Kenya defaults on its loan to the Export-Import Bank of China. Kenyan Government Faces Backlash After Chinese Contract Leaks