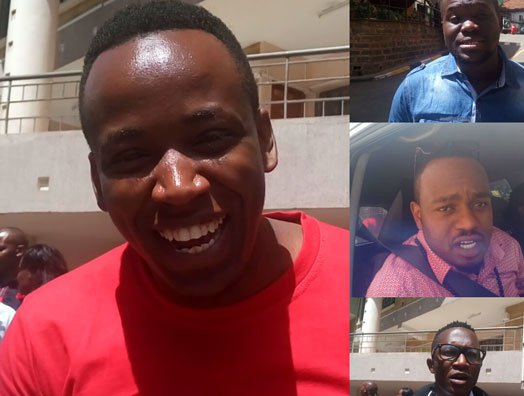 By BONIFACE NYAGA
Various Kenyan gospel artistes have defended their music genre against a chorus of accusations that have recently dominated social media.

With every release fans have taken to the internet to express their dissatisfaction with the authenticity of the message in the Kenyan gospel fraternity.

The gist of the public outcry is that gospel artistes are too busy with showbiz to actually minister. It has also been propagated that secular artistes have released songs that are “more gospel” than those who purport to be in the ministry.

Some have even suggested that secular artistes like Sauti Sol, Nyashinski and Yemi Alade should be nominated for a Groove Award.

Their songs Kuliko Jana (Sauti Sol), Mungu Pekee (Nyashinski) and Gode (Yemi Alade) are are considered by many as “more gospel” than some of the tracks that gospel artistes have been releasing.

But while speaking after a one-on-one session with visiting Nigerian gospel powerhouse Sinach, gospel artistes defended their space saying that for them gospel music is not just an art but a calling. Here is what some of the gospel artistes that Nairobi News spoke had to say:

Boss MOG: “A writer can write about anything; today they will write about God, tomorrow about something else. Salvation is personal, you need a relationship with God, otherwise you are just singing about someone you don’t know. For secular artistes this is just art but for us it’s a calling. ”

Majic Mike: “I have utmost respect for Sauti Sol, but their song Kuliko Jana is not theologically correct. God loves us the same today as he did two thousand years ago. He doesn’t love us more today than he did yesterday. Gospel is not what we decide it is, gospel is the word of God, and anything that deviates from the true doctrine is not gospel. ”

Mr T: “The rot is beginning at the pulpit when the spring is polluted at source, our preaching is very materialistic and we are only singing what we have been taught. We need to go back to the truth of the word,  if we teach truth at the altar it will come out in our music.

Nico Ochieng: “My advice is, let’s find a way to incorporate funky beats with the word of God. Sometimes we are too focused on the beat.”