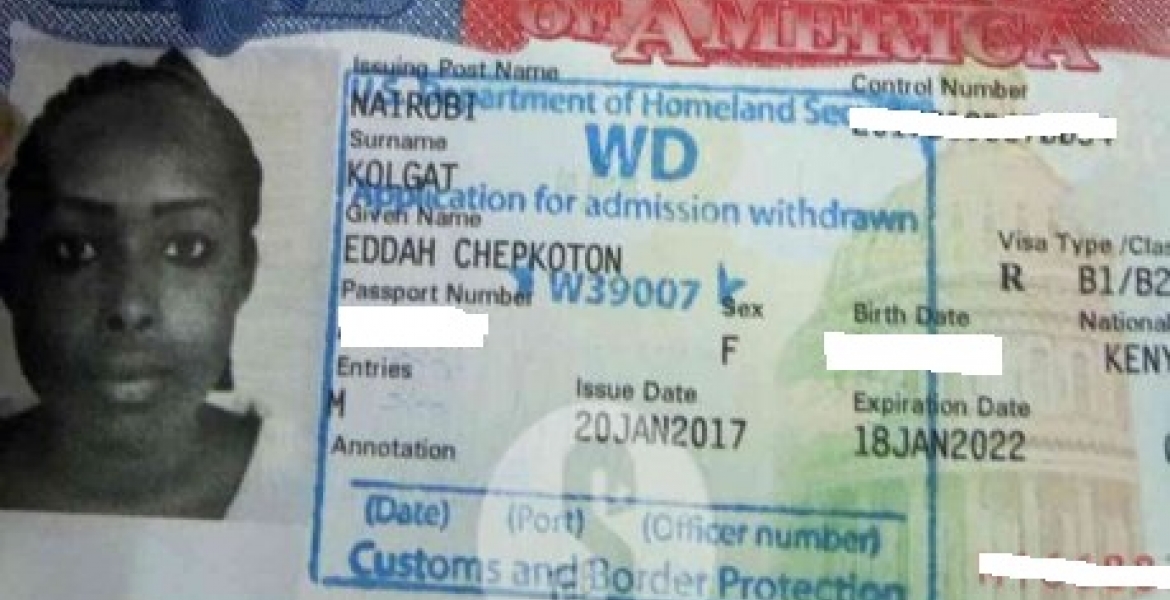 A Kenyan girl was denied entry into the United States a day after courts barred President Donald Trump from deporting immigrants.

Ednah Chepkoton, 25, was held at Chicago’s O’Hare International Airport for many hours after getting off a United Airlines flight on February 4.

She had been given a five-year multiple entry visa by the US embassy in Nairobi on January 20.

Ednah, a Kabianga university nursing graduate, narrated her harrowing experience to the Star from the airport, after an immigration officer singled her out of thousands of passengers who were on transit.

“We landed at around 9.30 am but when I was clearing with customs an immigration officer called me aside and started questioning me,” she said.

Chicago is one of the areas where anti-travel ban protests have simmered for days.

While checking Ednah’s passport and visa, the officer asked what her real mission to the US was.

“I was so confused and terrified. It was my first trip out of Kenya,” she said.

The officer then started checking her luggage and documents. He asked her why she was carrying her academic papers and if she did not plan to return to Kenya.

“I told him I always travel with my papers and that I had a return ticket,” she said.

But she was told to go and wait outside while her issue was discussed.

The officer called Ednah back after four hours and asked her to give him her cell phone.

“He asked for the password which I gave to him,” she said, adding she was then asked to leave the office.

Ednah was so terrified by that time and passengers in her connecting flight to Baytown were already boarding.

“I went back to ask why my case was taking long because my flight was leaving. It was at that juncture that the officer, who was with a woman in uniform, told me he had two questions for me,” she said.

She was asked to choose between being banned from the US for five years and having her visa withdrawn.

Even more terrified by this turn of events, Ednah requested the officers to let her call her cousin. They refused.

Caught between a hard rock and a hard place, she chose the cancellation of her multiple entry visa.

Ednah was bundled into a return flight to Nairobi at around 6pm, more than eight hours after setting foot in the US.

“I was really looking forward to my one-month stay in the US. We had spent a lot of money on air tickets…it is so sad that after all the vetting at the embassy in Nairobi I was humiliated this much.”

Ednah had paid $1,390 to Lufthansa airline for her return ticket. She connected to her flight in Frankfurt on February 3.

Upon returning to Kenya, Ednah called the US embassy and was told to send her denial of entry letter. The Star had not obtained a comment from the embassy by press time.

But a US judge issued a stay temporarily halting the deportation of visa holders or refugees under the executive order.

The judge’s stay prevents those “caught up” in the aftermath from being deported.

The court decision came as thousands protested at airports in several US states over Trump’s clampdown on immigration.

The American Civil Liberties Union, which filed the suit, estimated that between 100 and 200 people were being detained at airports or in transit.

Kenyan girl detained at Chicago airport for hours, denied US entry over Trump ban Reviewed by samrack on February 10, 2017 .