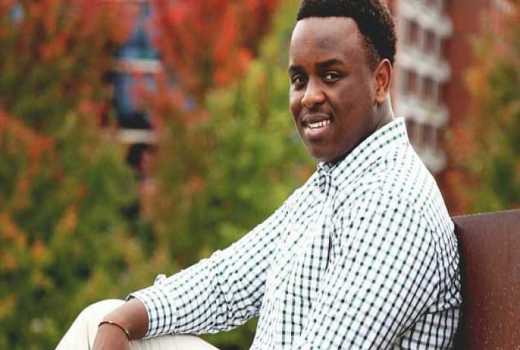 Griffin Gutwa, the Kenyan who died aboard a plane in the US Pic[Courtesy]

A Kenyan couple living in the US is in shock following the death of their 18-year-old son who fell asleep on a plane and never woke up. Griffin Gutwa, a student at the University of San Diego, California, where he was studying to be a doctor, was on his way home for Christmas. The former Burnsville High School student, the oldest of four children, was the first to attend college since the family moved to the US in 2004. According to US press reports, Mr Gutwa called his family on the morning of December 22 just before boarding a Delta Airlines flight from San Diego to Minneapolis. “He had just finished his exams,” said his father, Gideon Gutwa. “He was excited to come home.” About an hour into the flight, Griffin asked for warm water. He later leaned his head against the window and fell asleep, according to other passengers. The passenger next to him became concerned when his breathing changed, and called for a flight attendant. The attendant checked on him, realised something was wrong and asked for a medical professional to help.  Gutwa was not breathing and the pilot began looking for a place to make an emergency landing. The nearest airport was in Sioux Falls, South Dakota. But paramedics at the airport were unable to revive Gutwa, according to Sioux Falls Police Department. The father was told CPR (cardiopulmonary resuscitation) was performed on his son for 45 minutes but he did not wake up. Continue journey Gutwa’s body was left in Sioux Falls and the plane continued with the journey. At about 6pm, his father was called by Minneapolis St Paul International Airport to pick up his son. He was told the plane had been delayed for two hours. The delay didn’t bother the senior Gutwa. It just gave him more time to run back to Burnsville to pick up the rest of the family. When the father returned, he had not even gotten out of his car when airport security approached. He thought he had parked improperly. They later asked if he was Griffin’s father. This, he said, confused him. “How come they know my son?” he said. The officers directed him and the family to an office where they told him Griffin was dead. “I thought I was dreaming. I could not believe it,” Gideon said. “He was very healthy. He had just been here for thanksgiving. We were expecting him to arrive safely.” Described as a responsible, outgoing and helpful teenager, Griffin planned to use his medical degree to help the less fortunate. He always talked of returning to Kenya to start non-profit organisations to help alleviate poverty. The cause of death is still under investigation by the Sioux Falls medical examiner. [From New York Post.com]
Source: https://www.standardmedia.co.ke/

Griffin Gutwa, the Kenyan who died aboard a plane in the US Pic[Courtesy] Kenyan aspiring doctor dies on flight home for holidays San Diego, California A Kenyan couple living in the US is in shock following the death of their 18-year-old son who fell asleep on a plane and never woke up. Griffin Gutwa, a student