Kenya to get new chief justice by October 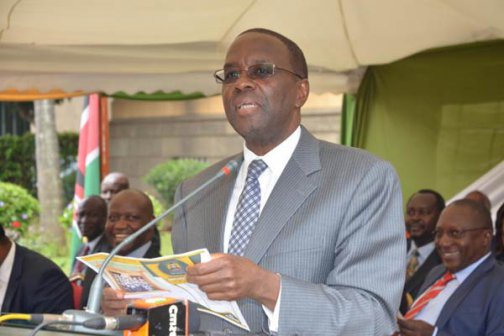 Kenya to get new chief justice by October

The Judicial Service Commission (JSC) projects that there will be a new chief justice to replace Willy Mutunga by October.

Commissioner, Justice Aggrey Muchelule, denied claims that the commission is divided over the selection of the next CJ.

According to senior JSC officials, Dr Mutunga is set to vacate office next month and Kenyans are expected to have a new CJ by October.

Muchelule told Kenyans to expect the CJ by October barring a hitch in the recruitment process.

Noting that the JSC would recruit a person of responsible character, the commissioner told Kenyans not to be anxious over who would take the position.

“What we are telling Kenyans is that there should be no anxiety. There will be continuity in the Judiciary after Mutunga’s retirement,” said the commissioner.

Muchelule said the CJ position is not yet vacant and that there are timelines in law, which must be kept.

He said the law states that the seat has to be declared vacant first and thereafter the position advertised for potential candidates to apply.

“As far as we are concerned, there is no division in JSC on the recruitment of the new CJ. JSC commissioners are working together, contrary to claims by other quarters. We are responsible enough to give Kenyans an independent, competent, responsible and accountable CJ,” Muchelele said.

Addressing mourners during the burial of Lilian Zighe, the wife of High Court judge Justice Msagha Mbogholi at Kasarani on the outskirts of Voi town yesterday, the judge disclosed that the JSC was on a retreat to strategise on the recruitment process.

He said that the idea that the position was for men only was wrong, adding that women are also capable of leading the Judiciary.

“What we want is a responsible man or woman, who can take the Judiciary to the next level irrespective of tribe or gender. The position is not reserved for certain communities and every Kenyan can apply and get the position,” he said.

Present at the burial were Taita-Taveta Governor John Mruttu, Senator Dan Mwazo and Woman Rep Joyce Wanjala Lay among others.

Kenya to get new chief justice by October Reviewed by samrack on May 9, 2016 .

Share thisFacebookTwitterPinterestEmailWhatsAppChief Justice Willy Mutunga is set to vacate office next month. Kenya to get new chief justice by October The Judicial Service Commission (JSC) projects that there will be a new chief justice to replace Willy Mutunga by October. Commissioner, Justice Aggrey Muchelule, denied claims that the commission is divided over the selection of