KENYA SCORES A DOUBLE IN BARCELONA 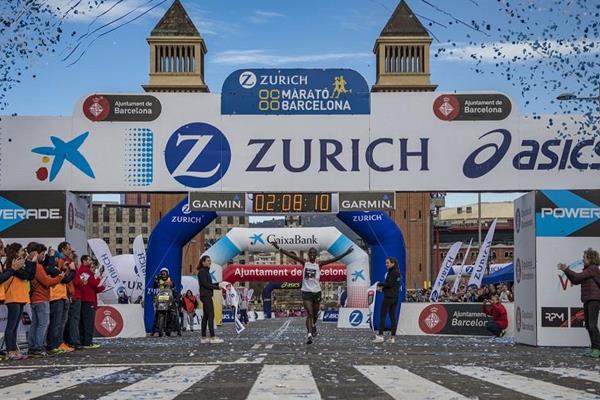 KENYA SCORES A DOUBLE IN BARCELONA

Anthony Maritim and Ruth Chebitok scored a double victory for Kenya at the Zurich Marató de Barcelona, an IAAF Bronze Label road race, on Sunday (11). Despite strong winds that impacted the race, the top three finishers in each notched career bests.

The men’s race opened at a steady 3:02 per kilometre rhythm set by a triumvirate of pacemakers who went through the early checkpoints in 15:11 (five kilometres), 30:23 (10 kilometres), and 45:40 (15 kilometres). The first surprise came when the reigning champion, Kenya’s Jonah Chesum, began to lose ground with 40 minutes on the clock to lose any chance of defending his title.

By the halfway point, reached in 1:04:21, no fewer than 15 men still remained in the leading pack, among them, Ethiopia’s Tsegaye Kebede and Tariku Kinfu plus Maritim who seemed to run effortlessly waiting to make their move over the second half.

Like a Swiss clock, the pacesetters maintained their pace unchanged through 25 kilometres which was covered in 1:25:56. Just before 30 (1:31:02), the main group was whittled down to six: the Kenyan trio of Maritim, Silas Too and Hillary Kipsambu plus the Ethiopians Kebede, Kinfu and Abeg Tsedat Ayana.

Once the pacesetters completed their duties, it was Maritim who injected a lethal sub-3:00 per kilometre pace to run the following five kilometre section in 14:52 to reduce the lead group to four as Kebede and Ayana could not live with that speed.

Maritim’s front-running kept on paying dividends as he broke away easily 38 kilometres into the race to build a handsome margin of 15 seconds by kilometre 40 –2:00:57 to Too’s 2:01:12– while Kipsambu ran another seven seconds behind.

Maritim was the clear winner at the tape in 2:08:08 while Too came runner-up in 2:08:25 with Kipsambu completing a clean podium sweep for Kenya in 2:08:52. The three each improved their respective career bests by over one minute. Finally, the Ethiopian trio of Kinfu, Kebede and Ayana crossed the line together in 2:09:25 while Chesum had to settle for a 2:17:39 clocking on this occasion.

“Today was my sixth ever marathon effort and my first time competing in Spain and I can’t ask for more with a win and a massive PB,” Maritim, 32, said. “The second part of the race is particularly fast.”

The women’s event kicked off at a moderate pace as the pacer, Great Britain’s Tom Payn, covered the opening five kilometres in 17:34. The five main women in contention ran comfortably at his shoulder: Kenya’s Ndungo Lucy Wanjiku and Ruth Chebitok plus Ethiopia’s Worknesh Alemu, Alemitu Begna and Beyene Belaynesh Tsegaye.

The debutant Tsegaye ruled the race over the following kilometres with Begna struggling with the rhythm before finally losing contact with the main group. She reached 30 kilometres in 1:43:39 with a two-second advantage on Chebitok and Alemu.

The key move came shortly after the 35 kilometre point when Chebitok heated up the pace to kill the race thanks to a 16:58 five-kilometre stretch to build a clear advantage of no less than 53 seconds on Tsegaye with some two kilometres remaining.

“I’m both surprised and satisfied with my outcome,” the 28-year-old Chebitok said. “I consider myself a half marathon specialist but after such a positive experience like today’s I’m sure I’ll tackle the marathon more times. I might have run even faster today but my pacesetter Tom Payn suffered an injury by halfway; anyway, I completed a great run.”

Emeterio Valiente for the IAAF

KENYA SCORES A DOUBLE IN BARCELONA Reviewed by samrack on March 11, 2018 .

Share thisFacebookTwitterPinterestEmailWhatsAppKENYA SCORES A DOUBLE IN BARCELONA Anthony Maritim and Ruth Chebitok scored a double victory for Kenya at the Zurich Marató de Barcelona, an IAAF Bronze Label road race, on Sunday (11). Despite strong winds that impacted the race, the top three finishers in each notched career bests. The men’s race opened at a