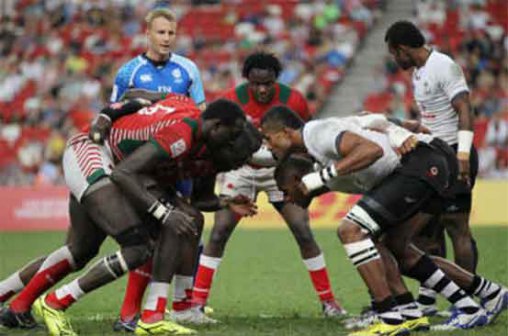 Kenya Rugby Sevens national team face off Fiji the at the HSBC Singapore 7s. The  team will touch down this afternoon at 2:30pm at the Jomo Kenyatta International Airport, Nairobi. (PHOTO: COURTESY)

here will be song and dance courtesy of various traditional dancers as the country conducts a rare fete for the champions. Upon leaving the Airport, a convoy of top-of-the-range motor vehicles will drive the jubilant players along Mombasa Road through to Ole Sereni Hotel, where the team’s sponsors, Kenya Airways, will host the boys to a luncheon at the  hotel’s poolside from 3.30pm. Today, KRU will not be in charge of the team’s reception since all plans have been taken over by the Ministry of Sports, Kenya Airways and Sports Kenya. KRU on the other hand have only been given the day’s itinerary and Omwela’s team will join Wario and Mbuvi at a press conference at Ole Sereni after lunch. According to reports from State House, President Uhuru Kenyatta, himself a former rugby player and an ardent fan of Kenya Sevens will not be at the team’s arrival as he is held up at the Cabinet retreat in Naivasha. Plans are in place for the President host the entire Kenya Sevens team in State House at a later time. “This is a great achievement by a third world nation and this is what the entire world would be envious about,” said Ekai.

The triumphant entry of the ‘Lions of Singapore’ otherwise the Kenya Sevens, marks a turn for the better of side that nearly relinquished its core rugby league status. For the last three years, Kenyan Rugby has been making headlines for all the wrong reasons. During the said period, the Kenya Rugby Union (KRU), has been riddled with endless wrangles and constant infighting over the resources at the Union’s disposal. The boardroom intrigues at KRU have unfortunately spilled to the public as if every director was competing on how best to wash their dirty linen in public. As a result, in 2015, all corporate firms, except for Kenya Airways bolted out of the Rugby Union. The situation has been so bad that during the 2014–15 HSBC Sevens World Series, Kenya finished position 13 with just 46 points and risked relegation from the core rugby sevens league. Fast forward to 2015/2016 season,  the KRU aficionado and their faithful benefactors, Kenya Airways will this morning roll out an impeccable red-carpet to welcome the Lions of Singapore. The Benjamin Ayimba-led team not only won their maiden Main Cup title at the Singapore Sevens, but did so in spectacular fashion as they took powerhouses, Fiji to the cleaners.
Read more at: http://www.standardmedia.co.ke/sports/article/2000198731/kenya-plans-big-bash-for-rugby-heroes