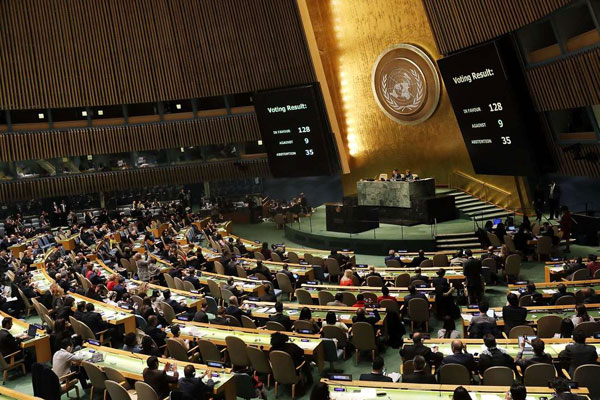 The voting results are displayed on the floor of the United Nations General Assembly in which the United States declaration of Jerusalem as Israel’s capital was declared “null and void” on December 21, 2017 in New York City. PHOTO | SPENCER PLATT | AFP

Kenya has been invited to a January 3 US “friendship” reception for United Nations member-states that did not vote in opposition to Donald Trump’s decision to move Washington’s Israel embassy to Jerusalem.

The invitation intended “to thank you for your friendship to the United States” was extended to Kenya and 63 other countries by Nikki Haley, the US ambassador to the UN. She and President Trump had earlier warned of possible US retaliation against states that opposed the embassy move.

Kenya was among 21 countries that failed to vote in the UN General Assembly on Thursday. The resolution that in effect condemned Mr Trump’s decision won overwhelming approval, with 128 countries voting in favour, nine in opposition and 35 abstaining.

In a Twitter message after the vote, Kenyan UN Ambassador Macharia Kamau said Kenya would have joined the group of abstainers had Nairobi’s UN mission in New York been operating on Thursday.

The envoy noted on Twitter that the mission had shut down on Wednesday for the festive season, with the result that Kenya was “officially MIA” [missing in action] for the UN vote.

Ambassador Kamau did not respond to a Nation query as to why the Kenya mission had closed while those of 172 other UN member countries were functioning sufficiently to cast votes on the Jerusalem resolution.

“KE has voted for ALL liberation movements consistently for 53 years and even hosted meetings on Palestine in Nairobi and elsewhere,” Ambassador Kamau tweeted on Thursday.

He added that it is Kenya’s policy to abstain on UN resolutions specific to particular countries, with the exceptions of Palestine and Cuba. Ambassador Kamau said Thursday’s resolution was specific to the US.

Kenya’s actual absence or its projected abstention may also reflect a reluctance to jeopardise its standing as the top recipient of US aid in sub-Saharan Africa.

According to the US Agency for International Development, Kenya was given a total of $1.1 billion in assistance from all US agencies in fiscal 2016.

Uganda, which ranked as the sub-Saharan region’s third-largest recipient of US aid, also chose not to risk a reduction of its $741 million in assistance. Uganda abstained on Thursday’s vote, as did Rwanda ($268 million in US aid) and South Sudan ($708 million).

Tanzania, however, voted against the US position despite receiving $629 million from Washington last year. Somalia also defied the US on the Jerusalem issue. Somalia’s US aid total is listed as $275 million, but the country benefits from hundreds of millions more in US assistance in the form of subsidies to the African Union force fighting Al-Shabaab as well as training of Somali troops by US instructors.

Ghana, Nigeria, South Africa and Ethiopia were among other African countries that voted against the US on Thursday. Togo was the only sub-Saharan nation to cast a vote in favour of the US embassy shift.

Sub-Saharan Africa’s overall showing on the UN Jerusalem resolution may be regarded by Israel as a generally positive outcome.

Some Israeli commentators are arguing that the total of seven African abstainers and eight no-shows, including Kenya, points to the partial success of Prime Minister Benjamin Netanyahu’s recent diplomatic forays into the sub-Saharan region.

Explaining why he is undertaking a political offensive in Africa, Mr Netanyahu further stated, “My goal is to erode this majority, this great blocking majority of 54 African countries that is the basis of the automatic majority against Israel in the UN and other international bodies.”

Israel’s attempts to win friends in Africa have also been rebuffed.

An Israel-Africa summit scheduled for October in Togo was cancelled after Palestine urged a boycott of the event. Israel said the cancellation was due to unrest in Togo.

But Israel later returned its envoy to Senegal.

Again defying Israel, Senegal voted on Thursday in support of the UN resolution condemning the US embassy move to Jerusalem.

Senegal may have calculated that it can count on receiving Israeli assistance regardless of whatever threats or diplomatic gestures the Jewish state might initiate.

African recipients of US aid who voted in the UN against Mr Trump’s stance may have similarly decided that the US president’s threats of retaliation were mere political bluster.

State Department spokeswoman Heather Nauert implied after the UN vote that the US is backing away from its warnings of a possible aid cut.

“The president had said yesterday that the UN vote is really not the only factor that the administration would take into consideration in dealing with our foreign relations and countries who have chosen to go one way or the other,” Ms Nauert told reporters.

Kenya invited to US party for abstaining on Jerusalem vote at the UN Reviewed by samrack on December 24, 2017 .

Share thisFacebookTwitterPinterestEmailWhatsAppThe voting results are displayed on the floor of the United Nations General Assembly in which the United States declaration of Jerusalem as Israel’s capital was declared “null and void” on December 21, 2017 in New York City. PHOTO | SPENCER PLATT | AFP  Kenya invited to US party for abstaining on Jerusalem vote