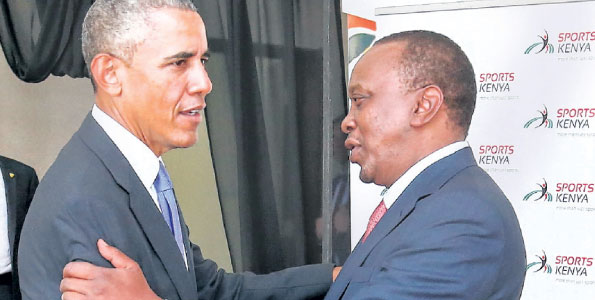 Kenya has agreed to share details of every financial transaction worth at least Sh1 million ($10,000) with the US government in the latest bid to curb money laundering and combat terrorism financing.

The information, which financial institutions, cash dealers and professional bodies are under obligation to submit regularly to the Financial Reporting Centre (FRC) — under the Proceeds of Crime and Anti Money Laundering (Amendment) Act, 2012 — will also be circulated to other countries.

Under a deal that President Uhuru Kenyatta signed with President barack Obama when he visited Nairobi in July, the US Government will provide Kenya with a software to track such transactions in a bid to detect illicit money.

“The US also pledges to procure software for Kenya’s FRC to improve the analysis of suspicious transactions and better communication with other countries’ FRCs once the requisite platform is in place,” the White House says in a communique posted on its website.

“The US commits to conduct an in-country assessment to determine the feasibility of such an engagement”.

Under the deal, Kenya will give the US open access to the software “to enhance collaboration between the two countries.”

Kenya says the partnership will boost the FRC’s capacity even as the US Governmentfurthers its fight against global terrorism and other international money crimes.

“The US Government comes on board to help fight money laundering at a time when Kenya’s Financial Reporting Centre has been struggling to win ‘‘a war in a game that is controlled through modern technology where most players collude with financial institutions to achieve their illicit money transactions greed”, the Presidential Strategic Communication Unit writes.

“The US Government commits to support Kenya’s efforts to join the Egmont Group and to work with the Government of Kenya in meeting the requirements for membership,” the White House says.

For a start, Kenya will engage the World Bank to conduct a full risk assessment for money laundering and terrorism finance, the White House statement adds.

Kenya has also committed to introduce compulsory ethics training for all public officials, raise its forensic investigation capacity, and strengthen its border controls even as it undertakes to fully implement its anti-money laundering rules and regulations.

Kenya also committed to arrest any public official suspected of engaging in crime and to “successfully prosecute persons suspected of corruption-related crimes.”

Attorney-GeneralGithu Muigai is expected to meet with his US counterpart “to discuss best practices and to improve bilateral cooperation in criminal cases, with a focus on mutual legal assistance and extradition.”

Kenya Gives the US Access to Bank Transactions of over Sh1 Million Reviewed by samrack on September 1, 2015 .

Share thisFacebookTwitterPinterestEmailWhatsAppPresident Uhuru Kenyatta welcomes his US counterpart Barack Obama at the Safaricom Gymnasium, Kasarani, in July. PHOTO | JEFF.. Kenya Gives the US Access to Bank Transactions of over Sh1 Million Kenya has agreed to share details of every financial transaction worth at least Sh1 million ($10,000) with the US government in the latest bid to