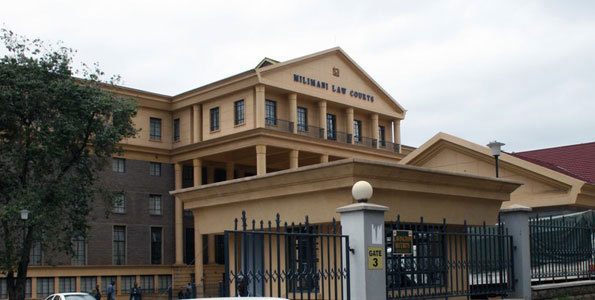 Kenyan authorities have detained an African Union (AU) diplomat for non-settlement of Sh3.6 million incurred during a 2012 conference he organised at Nairobi’s Laico Regency Hotel.

Omar Faruk Osman, a Somali national, was arrested last week at Nairobi’s Jomo Kenyatta International Airport while travelling to Morocco, following complaints by local tours and travel firm Pinnacle – which organised the conference on his behalf.

“Immediately after the conference Mr Osman promised to pay the sums through numerous meetings and emails,” Pinnacle said in its petition, adding that Mr Osman had at one time confirmed that the amount had been sent to their local bank account but nothing had been paid to date.

Justice Charles Kariuki issued a warrant for his arrest after Pinnacle went to court claiming that Mr Osman, who has been on the run since 2012, has occasionally sneaked in and out of Kenya without settling the debt.

Mr Osman, who was arraigned in court yesterday, was released after depositing Sh1.8 million as security and surrendering his three passports, pending the hearing and determination of a case Pinnacle has filed at the Milimani Court.

Aside from his Somali and British passports, Mr Osman also holds an AU diplomatic passport.

Pinnacle claims Mr Osman incurred the debt when he organised a conference at the Laico Regency Hotel as an official of the East Africa Journalists Association (EAJA).

But Mr Osman says in a fresh application that his arrest and confiscation of his travel documents is illegal as he enjoys diplomatic immunity as the chairman of the political affairs committee of economic and social cultural commission of the AU.

Pinnacle has enjoined the EAJA as the second respondent in the suit.

The conference was sponsored by the United Nations Educational, Scientific and Cultural Organisation (Unesco) with Mr Osman as the organiser.

EAJA claimed in an email to Pinnacle that Mr Osman misappropriated funds intended to settle the debt and promised to organise for a repayment.

Mr Osman told the court that he was on an AU trip to Casablanca on Sunday May 1 when he was arrested by immigration officers before he was dragged to court and ordered to deposit half the sum Pinnacle wants to recover from him.

The AU diplomat says walking in the streets of Nairobi without any form of identity ha a turned him into highly suspicious individual and made it impossible to attend to official duties.

Pinnacle claims that Unesco had confirmed releasing all funds for the conference to Mr Osman and his organising committee, but the AU diplomat has not been forthcoming with the payment.

Mr Osman, however, says the EAJA reassigned the Sh3.6 million intended for Pinnacle to him as salary arrears and insisted that confiscation of his passports and grounding in Kenya violates his rights under the Privileges and Immunities Act.

“As an official of the AU no civil or legal suit can be commenced or sustained against me as I enjoy immunity. I have an email from EAJA staff that converted that payment (Sh3.6 million) to offset my salary arrears.

Pinnacle adds that Mr Osman has previously lied about depositing the owed sums in the tours and travel firm’s bank account, and now wants the debt settled.

The firm also claims that Mr Osman was in November 2013 arrested and jailed in Ethiopia for failing to pay hotel and taxi bills before he was deported to his home country-Somalia.

“Mr Osman h as a reputation of obtaining goods and services in foreign countries and leaving without paying for them. I am aware that Mr Osman was arrested and jailed in Ethiopia over the same claims that Pinnacle is making,” says Elizabeth Mbugua, a director at Pinnacle.

Mr Osman says in his application that the court should return his passports and allow him to travel in and out of the country. He wants to be allowed to attend court only when he is needed to appear in person.

He adds that EAJA has admitted to owing Pinnacle the Sh3.6 million and has agreed to offset the debt hence there is no need for him to deposit security .

Justice Olga Sewe will hear the parties on May 17 and give further directions on the case afterwards.

Milimani Commercial Court. PHOTO | FILE Kenya detains AU diplomat over Sh3.6 million hotel debt The firm also claims that Mr Osman was in November 2013 arrested and jailed in Ethiopia for failing to pay hotel and taxi bills before he was deported to his home country-Somalia. Mr Osman, however, says the EAJA reassigned the