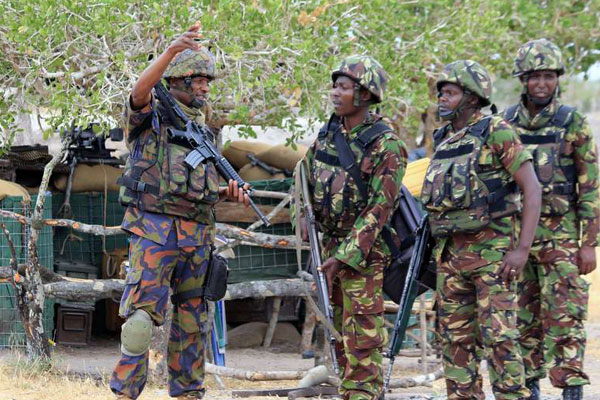 An Al-Shabaab commander has been killed in battle against Kenya Defence Forces in Somalia.

KDF Spokesman Joseph Owouth said the terrorists had attacked a camp occupied by Somalia National Army in Kuday, before the Kenyan soldiers came in as reinforcements.

Bashe Nure Hassan was killed together with one of his lieutenants.

Three AK-47 assault rifles, 11 magazines, a satellite phone and 290 rounds of ammunition belonging to the militants were seized.

“Amisom/KDF soldiers remain vigilant and will continue to relentlessly pursue the terrorists to ensure peace and security of our country Kenya and will support operations to stabilize Somalia,” Colonel Owuoth said.

He added that SNA and KDF did not incur casualties during the 3am battle.

This is another success KDF has bagged following the killing of 57 Shabaab militants near Afmadow on March 2.

Colonel Owouth, at the time, said that five pickup trucks mounted with heavy machine guns and other weapons belonging to the terror group were destroyed.