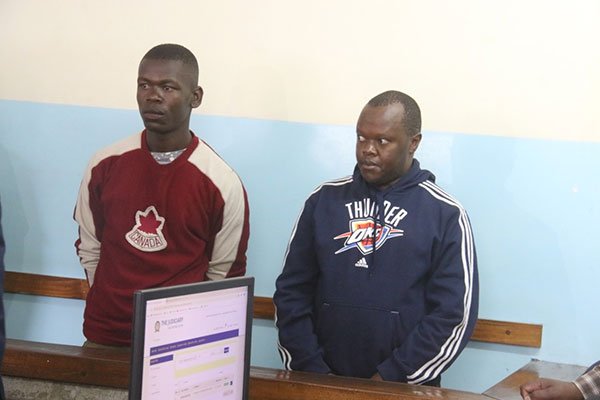 Major Peter Mugure, the military man accused of murdering his estranged wife and two children, will spend the next 21 days in remand, a Nanyuki court has ruled.

The same fate on Monday befell his co-accused Collins Pamba— a casual labourer at the Laikipia Airbase in Nanyuki suspected to have helped the major bury bodies of the three victims.

The two accused were presented before Nanyuki Chief Magistrate Lucy Mutai on Monday after spending two nights in police cells.

They were arraigned after a weekend of interrogation by detectives from Directorate of Criminal Investigations’ Serious Crime Unit.

Major Mugure appeared calm throughout the tense court session even as irate and anxious residents milled around the room.

Nanyuki residents flocked the court to have a glimpse of the man who has hit news headlines for all the wrong reasons as others used mobile phones to take his photos and videos.

Sporting a dark blue jumper, Mugure was presented in court in handcuffs.

He looked composed as he tightly held on some documents but did not utter a single word as he was represented by lawyer Mwangi Wanjohi.

After the court session, irate residents started yelling as they expressed anger at the gruesome murder of the woman and her two children.

But detectives speedily bundled him and his co-accused Mr Pamba in two separate vehicles and sped off.