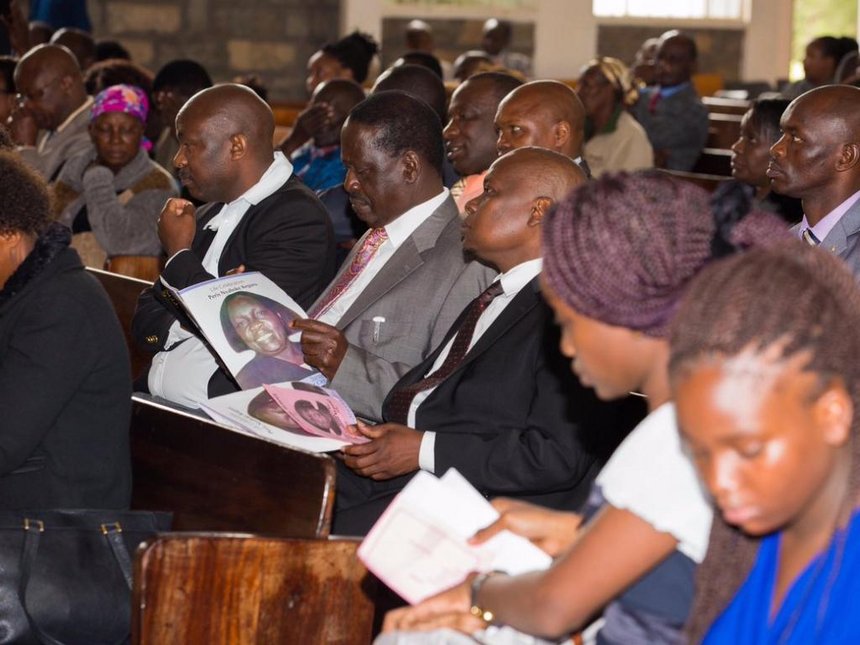 Narc Kenya leader Martha Karua on Friday called Raila Odinga “a friend and a colleague” after meeting him for the first time since ditching him.

The two were attending a funeral service at Nairobi Central SDA Church when Karua invited the Cord leader to speak before she did.

Raila addressed the service but did not talk about Karua’s decision to support President Uhuru Kenyatta in the 2017 elections.

On Thursday, Karua voiced her support for Uhuru and said she intends to vie for Kirinyaga Governor.

This drew criticism from Kenyans on social media as they accused Karua of “flirting with opposition for three years’ only to change her mind.

But Karua said on Twitter: “Thanks you all for your comments! Now allow me to exercise my freedom of association and expression as I always do and always will.”

“You will never know your stand I guess its why you loose every time, Politics is not about chances it’s about your stand,” JayBoy SteVen ‏said.

User HDSlogic said, “You are supposed to lead your people not let tribalism lead you, if your people want to jump of a cliff would you let them?”

“@MarthaKarua that was the worst move from the iron lady,” Brian Kiprop said.

But other users applauded Karua for making that move saying Jubilee is the party to admire.

“@MarthaKarua we missed you mum. When you were away … we all prayed that you would come back. Karibu mama,” Peter Munyaka said.

Chrisantus Mogeni said “@MarthaKarua the people of Kirinyaga have spoken. We should respect the choice of politics they want. Kudos!”

“Corruption is an individual choice/ responsibility not dependent on political leaning character! It is not partisan or ethnic,” she said

“President Kenyatta is doing his best to fight corruption and I fully support his endeavours. I will join hands with the President to fight graft in the country. Everyone should back efforts by the Head of State.”

Other than running for President in 2013, Karua has been a strong critic of the government until recently, when she declared she would run for Kirinyaga governor.

She said, “The people in this region say they will vote for Uhuru Kenyatta. They should elect him to complete his two terms.”

Share thisFacebookTwitterPinterestEmailWhatsAppCord leader Raila Odinga at the Nairobi Central SDA Church for the funeral service of Mama Peris Kegoro, November 11, 2016. /COURTESY Karua meets ‘friend and colleague’ Raila after dumping Cord Narc Kenya leader Martha Karua on Friday called Raila Odinga “a friend and a colleague” after meeting him for the first time since