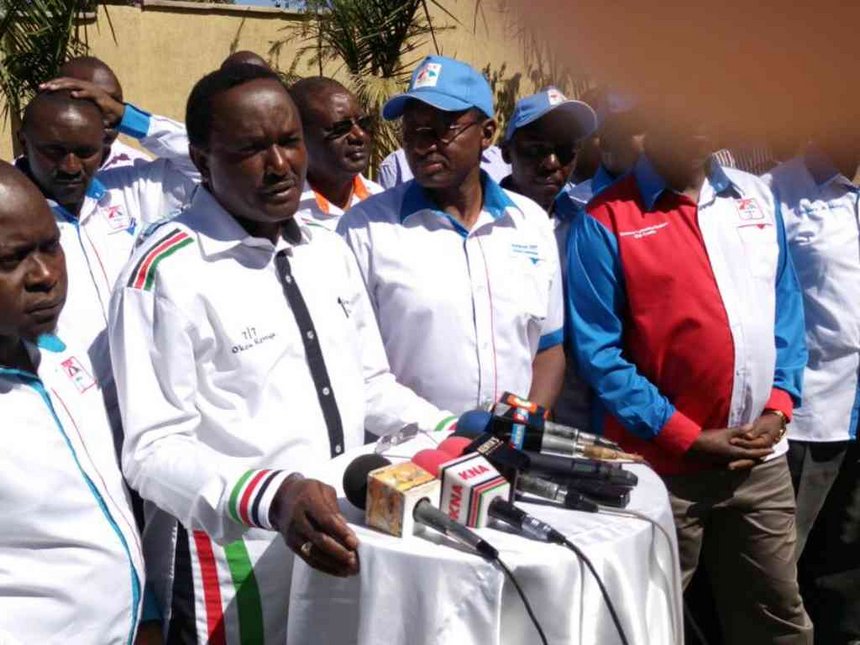 Wiper leader Kalonzo Musyoka has refuted claims that he is likely to abandon Nasa saying Jubilee agents could be behind the “malice”.

Kalonzo responded on Tuesday to an article by Daily Nation that said he might turn his back on Opposition colleagues and go it alone in the August election.

“Nobody will stop me from seeking the flag-bearer seat,” Kalonzo told the media in Nairobi, adding he cannot be sold to the highest bidder.

“I have no apologies to make for saying that I will seek the Nasa presidential ticket. Please let us remain focused.”

The Wiper leader said he would not have attended the first meeting of Nasa leaders in Bomet county at the weekend had he been making his own plans.

“I attended the first major event in Bomet. If I had intentions of wanting to run separately I would have not gone to the event. Some of the people propagating this lie may be agents who want to cause suspicion,” he said.

Kalonzo further said his “legs cannot be tied as I am not a Kamba leader.”

“We will expose you for who you are. if anybody thinks they can tie me and sell me, they are mistaken… I am a national leader. We must make it clear. This is very misleading,” he said.

The Nation article said Kalonzo’s allies are worried that he will run alone on a Wiper ticket outside the National Super Alliance.

It further said there were complaints about Kalonzo’s preference for certain leaders.

But the Wiper boss said they will hold fair elections and that the “manipulation” should end since he does not a preferred candidate.

The leaders told Jubilee to be ready for a showdown in the August 8 general election.

Early this week, the Nasa coordinating committee hit the ground running, just a day after it was formed, concerning the search for its presidential candidate.

The Star established that the 12-member team drawn from ODM, Wiper, ANC and Ford Kenya, the Nasa affiliate parties, met on Thursday evening.

The venue was a top secret but the meeting lay down rules of engagement.

A source in the coalition who sought anonymity said first on the agenda was the election of Senators James Orengo (ODM, Siaya) and Johnson Muthama (Wiper, Machakos), and MPs Sakwa Bunyasi (ANC, Nambale) and Eseli Simiyu (Ford Kenya, Tongaren) as co-chairs.

“We are now ready to move. We have no time to waste and the sooner we finalise this matter the better, so that we pave way for other programmes,” the source said.

Kalonzo refutes claims of abandoning Nasa, blames ‘Jubilee agents’ Wiper leader Kalonzo Musyoka has refuted claims that he is likely to abandon Nasa saying Jubilee agents could be behind the “malice”. Kalonzo responded on Tuesday to an article by Daily Nation that said he might turn his back on Opposition colleagues and go it alone