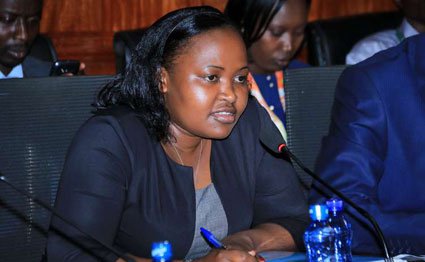 The biggest beneficiary of the Sh1.8 billion questionable National Youth Service transactions on Tuesday appeared before a parliamentary committee but still gave her interrogators the runaround about her role in the scam.

With a calmness that belied her relative youth and presumed inexperience, Ms Josephine Kabura played a game of selective amnesia, stonewalling and evasiveness that reduced members of Parliament to impotent fury.

The businesswoman initially said she could not remember who introduced her to the NYS, or even who alerted her to business opportunities at the service, before naming former Devolution Cabinet Secretary Anne Waiguru as her source.

On the third attempt to have her appear before the National Assembly Public Accounts Committee, Ms Kabura came with a lawyer but still said she could not remember details of an affidavit sworn in her name.

At one time, PAC Chairman Nicholas Gumbo, the Rarieda MP, abandoned his seat and walked up to where Ms Kabura was seated to point out some transactions in her own statement and which she had said she could not pinpoint.

Later in the afternoon, the committee went in camera in what was described as a chance for her to come clean on the transactions.

Committee members constantly reminded her that other witnesses had already testified and that they knew a lot about her role in the scam.

Throughout the interview she kept her cool, taking time to think her responses over and consulting her lawyer. It did not help matters that the MPs, by contrast, appeared ill-prepared, lacked a structure for questioning the witness and at times contradicted one another.

Ms Kabura’s appearance was testimony of the failure of institutions in fighting corruption. She still faces a case in the High Court stemming from the same questionable transactions.

The key suspect in the NYS scandal said she was introduced to the agency by Ms Waiguru, after which she managed to “win” tenders worth millions of shillings without competing with other companies.

“My contracts with the NYS were the local purchasing orders (LPOs) which were delivered to me asking me what type of goods to supply,” said Ms Kabura.

It emerged that the amount transacted by 20 companies, of which Ms Kabura said she was the “sole owner” could have been more than the Sh1.67 billion wired to her account from the Devolution ministry, given that bank details of 10 of the companies were not provided to the committee.

Mr Gumbo directed Ms Kabura to supply the details of the 10 companies — including Sh18 million she reportedly received from the Ministry of Lands, an indication that the dealings may have extended to other government departments.

However, efforts to establish where the funds ended up, or the trail of possible money laundering, hit a snag after Ms Kabura declined to name the suppliers she paid with the NYS money.

Mr Gumbo asked how Ms Kabura, who said she started her supplies business as a “side hustle” while working for an IT firm, carried the more than Sh100 million that she withdrew from Family Bank KTDA Branch, Nairobi, in cash.

“The Central Bank of Kenya Governor told this committee that Sh1 million in Sh1,000 denomination weighs one kilogramme. Can you explain to us how you carried money weighing 100 kilogrammes?” asked Mr Gumbo.

Ms Kabura responded that she carried the cash in “bags”, one at a time, to a quarry in Ongata Rongai, near Nairobi, where she paid the “quarry man”. But she could not provide receipts or remember the names of the “suppliers” she paid.

Ms Kabura was almost declared a hostile witness for what PAC described as withholding information that was already in the “public domain” — including in her affidavit, which she famously swore, linking Ms Waiguru directly to the scandal.

She declined to expound on some of the details in the affidavit, including “Sunday meetings” with former NYS senior Deputy Director-General Adan Harakhe and chairman of the ministerial tender committee, Mr Hassan Noor, where she reportedly was handed LPOs to supply “goods” to NYS, and her relationship with Ms Waiguru.

“I did not file any tax returns to the Kenya Revenue Authority on the payments I received from the NYS,” Ms Kabura offered as she came under increased pressure to account for the funds.

Amid a flurry of questions, and marked tension, she agreed to be heard in camera, where she was expected to reveal how she was used as a “decoy” to steal from taxpayers.

Kabura evasive before parliamentary committee Reviewed by samrack on November 1, 2016 .