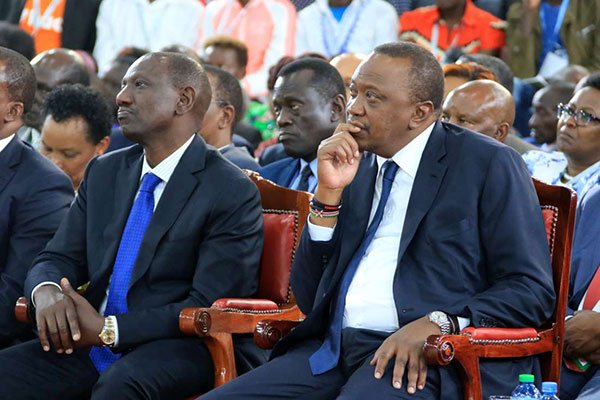 President Uhuru Kenyatta has taken control of the ruling Jubilee Party after officially kicking out party officials affiliated to Deputy President William Ruto and replacing them with his allies despite objections from his second in command.

Dr Ruto and his allies have in the past two weeks mounted an aggressive campaign to stop the changes, but the secretariat has gone ahead and confirmed the new appointees, opening another war front in the fractured ruling party.

Now Dr Ruto and his camp, the Saturday Nation understands, are planning to go to court to stop the process.

In an advertisement appearing elsewhere in this newspaper, Mr Tuju, as required by the party constitution, informs the public of the formal appointment of five people whose names appeared in a gazette notice by the Registrar of Parties on April 6, and whom he says will now sit in the party’s National Management Committee.

Dr Ruto did not respond to our questions last evening on how he plans to counter the move by the secretariat, but some of his close political associates indicated he would be moving to court next week.

Jubilee deputy Secretary-General Caleb Kositany, who is Dr Ruto’s de facto spokesperson on party matters, said Mr Tuju had acted “in defiance and impunity” by resubmitting the same names before approval by the National Executive Council as per the law.

“There is no way this can happen. Tuju has not complied with what the Registrar of Political Parties Anne Nderitu said. He does not want to follow the law and we will deal with him accordingly,” Mr Kositany said, but did not elaborate on what he meant by “accordingly”.

Kimilili MP Didmus Barasa, an ally of the DP, told the Saturday Nation that allied members will file a case in court against Mr Tuju’s actions in which they will demand that “he vacates office as a suitable replacement is sought”, and that in the interim Mr Kositany will act as secretary-general.“We have other plans which we can’t share now, but be assured we are ahead of them by numbers and strategy and his (Tuju’s) attempts will fail,” said Mr Barasa.

Mr Kositany said “NEC should have met, nominated those names and then announced them”.

“What Tuju has done is bypass the NEC and illegally nominate people who cannot hold office because they are not NEC members,” he said.

“Tuju’s DNA and all plans and schemes are not Jubilee, but purely ODM. His interest is to see Jubilee broken into pieces because he has no interest, brought no votes to Uhuru, and so is acting with a lot of recklessness”.

For Dr Ruto, this is not just a battle for control of the party, as he knows that losing the grip of the ruling party seriously complicates his calculations for his State House bid in 2022.

A senior member of his “war council” revealed some of the deeply-rooted fears in his camp: “We are keen to inherit the president’s central Kenya base. Now, how is that feasible if the vehicle is not Jubilee, which is associated with the president in that region?”

Party vice-chairman David Murathe had earlier told the Saturday Nation that as far as they were concerned, and despite the strong contestations from the wing led by DP Ruto, the changes were a foregone conclusion.

“For them to move to the dispute tribunal, there has to be a grievance, right? Certainly that grievance can only be the changes in members of the national management committee, which to us is already taking effect,” he reiterated last evening.

With this dramatic turn of events, and in the wake of the sentiments by both sides of the camp, observers pointed that the war within Jubilee had reached a point of no return.

“Tuju and his team have crossed the Rubicon. They must now decimate the ‘enemy’ completely, lest that enemy consumes them,” Dr Godwin Siundu of the University of Nairobi said.

According to Dr Siundu, the boldness with which the party secretariat is pushing the changes is rare and can only be effected with the blessings of an authority higher than the deputy president.

Nominated MP Godfrey Osotsi said: “I do not think Ruto has a chance in the fight for the control of Jubilee Party. The reaction by his lieutenants is faulty and risky in many ways.”

If ratified by the registrar, the changes would be a serious humiliation to Dr Ruto, who is largely relegated to the periphery in the running of government affairs since the political truce between his boss and ODM leader Raila Odinga.

It could also bring into disrepute his advisers, especially on why they let him expose himself so much by personally writing to Ms Nderitu in order to register his objections to the proposed changes yet he could still delegate.

After the registrar wrote back to Mr Tuju, the secretary-general said the secretariat would soon communicate the final decision.

“The party will in due course, and as circumstances permit, given the trying season that confronts the nation and indeed the world, consider the issues raised and reach the decision that it deems proper and fit in its best interest.

“Its decision will be guided by the law and by consultation with the party leadership as required by the constitution,” he stated.

Jubilee officially names new team as Ruto gripes Reviewed by samrack on May 3, 2020 .