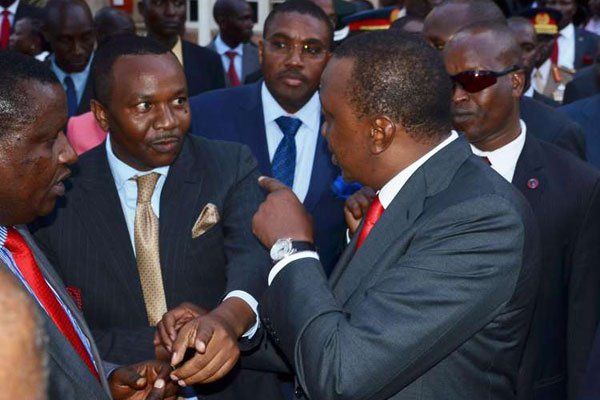 Dagoretti South MP Dennis Waweru chats with President Uhuru Kenyatta after the State of the Nation address in Parliament, March 31, 2015.

A Jubilee MP who unsuccessfully defended his seat during the just concluded party nominations has come out to deny claims he was leading a group of other losers to revolt against Deputy President William Ruto.

Dagoretti South MP Denis Waweru, who had initially announced his bid to vie for the Nairobi governorship but changed his mind, has dismissed the claims making rounds on social media platforms that together with other aspirants who had lost in the just concluded Jubilee nominations had met to plot Mr Ruto’s downfall.

The reports claim that the politicians, largely drawn from Mt Kenya, accuse the DP of interfering in the party’s nominations exercise.

Further, the reports claim that the group was plotting to defect from Jubilee Party and form their own outfit.

Without offering much about his counter-claim, Mr Waweru argued that the reports were intended to draw a wedge between Mt Kenya and the Rift Valley where President Kenyatta and his deputy Ruto hail from respectively.

“I am not aware of any meeting that took place on Sunday in a city hotel. I was not part of any meeting and those people trying to link me with such kind of malicious, false information should stop from trying to divide Jubilee,” said Mr Waweru.

In the post seen by the Nation, Mr Waweru is quoted as having said that Mr Ruto had planted his favourite people for various seats with an intention of banking on them as he eyes the Presidency in 2022.

“…he has bitten more than he can chew…,” reads a statement attributed to the Dagoretti MP.

The MP called upon other party aspirants who had lost to throw their weights behind the winners for Jubilee Party to secure majority seats in the August polls.

However, he said he would announce his next move at a late date following his shocking defeat to John Kiarie, a comedian.

Share thisFacebookTwitterPinterestEmailWhatsAppDagoretti South MP Dennis Waweru chats with President Uhuru Kenyatta after the State of the Nation address in Parliament, March 31, 2015.  Jubilee MP denies plotting DP Ruto downfall A Jubilee MP who unsuccessfully defended his seat during the just concluded party nominations has come out to deny claims he was leading a group