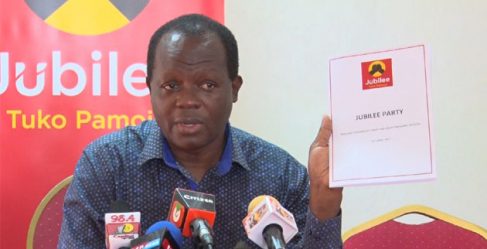 “All campaigns by Jubilee aspirants should stop by April 19, 2017,” the party asserted in the circular/FILE

Aspirants eyeing the Jubilee Party tickets have until April 19 to complete their campaigns.

Through a joint circular addressed to county officials and aspirants signed by Secretary General Raphael Tuju and National Elections Board Chairperson Andrew Musangi on Tuesday, the party announced that aspirants are to wind up campaign activities Wednesday ahead of the nomination exercise on Friday.

“All campaigns by Jubilee aspirants should stop by April 19, 2017,” the party asserted in the circular.

Aspirants are also required to have their agents accredited by the County Elections Boards (CEBs) by April 20 to facilitate the smooth running of the nominations process.

In order to ensure free and fair primaries, Jubilee House has directed all contestants or agents representing them to appear before polling stations by 5am to witness the sealing of ballot boxes ahead of the kick off of voting at 6am.

The ruling party has also cautioned candidates against violating the law saying any misconduct will be dealt with in accordance with the law.

“All aspirants and their agents are reminded that this activity of the party is governed by Section 31 of the Elections Act and that any attempt to subvert this process is actionable by law and the party will not hesitate to act based on that law,” the circular read in part.

“Acts of rowdiness, hooliganism, shouting and any form of disruption will not be tolerated,” the party further warned.

The party also requires candidates and their agents to sign the Independent Electoral and Boundaries Commission’s (IEBC) Electoral Code of conduct as it promises to conduct the nominations in line with IEBC standards.

All the polling stations will be open at 6am and close at 5am according to Jubilee.

To safeguard the integrity of the process, the circular outlined a four-point procedure to ensure results are not tampered with.

The guidelines are; proper sealing of ballot boxes, auditing of ballot papers as per the poll book at the end of polling, counting of votes at polling centers and filming of forms on which results are recorded before they are taken to polling centers.

Further, candidates have been warned against dressing in branded material during the polling day and using Public Address Systems to make any form of announcements or entertain voters.

Observers and members of the press are required to obtain accreditation by Thursday from CEB heads in various counties.

The party also unveiled two call centre numbers – 0771399841 and 0709175000 – through which aspirants will be able to make inquires, file complaints and report cases of election malpractices.

Unlike its main competitor ODM, Jubilee Party intends to conduct its nominations in all the 47 counties on a single day.

Share thisFacebookTwitterPinterestEmailWhatsApp“All campaigns by Jubilee aspirants should stop by April 19, 2017,” the party asserted in the circular/FILE Jubilee issues tough rules for Friday nominations Aspirants eyeing the Jubilee Party tickets have until April 19 to complete their campaigns. Through a joint circular addressed to county officials and aspirants signed by Secretary General Raphael Tuju