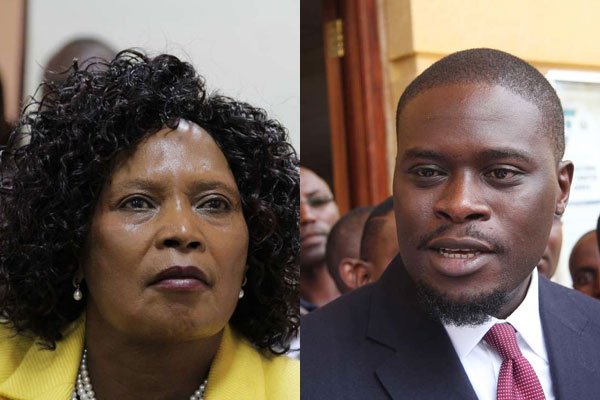 Nairobi Senator Johnson Sakaja said Thursday that he has initiated a court process seeking to nullify the appointment of former Othaya MP Mary Wambui as the board chairperson of the National Employment Authority.

Mr Sakaja argues that Ms Wambui is not suited to be the authority’s vision carrier. The authority is the brainchild of a bill Mr Sakaja took to Parliament during his stint as a nominated MP.

In a statement on Thursday, Mr Sakaja asked Ms Wambui to decline her appointment by Labour Cabinet Secretary Ukur Yatani that was made through a special gazette notice on Monday.

As she considers his plea, Mr Sakaja said a court case is imminent.

“I have further instructed my lawyers as well as those of the Kenya Young Parliamentarians Association to file a petition this (Thursday) morning seeking to quash this appointment,” stated Mr Sakaja.

“The respondents of this suit are The Cabinet Secretary of Labour, the Attorney General and (Ms Wambui),” he added.

Mr Sakaja drafted the bill to address a requirement in the Constitution that compels the government to provide a conducive environment for Kenyan youths to get jobs.

The bill promptly sailed through Parliament in was assented into law on April 1, 2016.

“The dream was noble. We surely tried and did our best as legislators. The rest was for the implementers (the Executive) to do theirs. The day His Excellency the President assented to this bill was possibly my most fulfilling as a Member of Parliament,” Mr Sakaja said in the statement.

The senator also expressed his disappointment in how the Executive has been “slow” in creating the employment authority he envisaged, which would help Kenyan youths get paid internships and make their job-hunting easier.

“I have severally expressed frustration with the slow pace of implementation of this institution and the seeming lack of goodwill to fully operationalise it,” he said.

Explaining why he thinks Ms Wambui cannot lead the authority into achieving the desired results, Mr Sakaja said the authority’s leader should be able to “liaise with and inspire the confidence of our private sector, academia, international markets and youth in bringing this dream to life”.

He went ahead to note that Ms Wambui’s appointment goes against the law that created the employment authority, which required that the chair of the board should have at least seven years of experience in human resource management or its equivalent.

“There are many young Kenyans who have distinguished themselves in the field of human resource management both locally and even to the level of the International Labour Organizaiton (ILO),” stated Mr Sakaja.

He added: “(Ms Wambui) is known to me, as we served together in the 11th Parliament as well as having been a member of The National Alliance party, which I chaired. I have confidence that she has the ability to serve Kenyans in a different capacity but not as the vision carrier and chairperson of the National Employment Authority.”

Arguing in support of her appointment, Ms Wambui said on Tuesday that she is up to the task.

“I got the post because I am better than those complaining. I have the qualifications and experience to run the office,” she told Nation.

Mr Sakaja expressed hope that the authority he envisioned, which will benchmark with initiatives like the UK’s Job Centre Plus and others across the globe, will be a reality if the right vision-carriers are appointed to head it.

“I still believe that the vision of this institution can be achieved. It must be achieved,” said the Jubilee senator.

Share thisFacebookTwitterPinterestEmailWhatsAppJohnson Sakaja takes on Mary Wambui over NEA appointment Nairobi Senator Johnson Sakaja said Thursday that he has initiated a court process seeking to nullify the appointment of former Othaya MP Mary Wambui as the board chairperson of the National Employment Authority. Mr Sakaja argues that Ms Wambui is not suited to be the