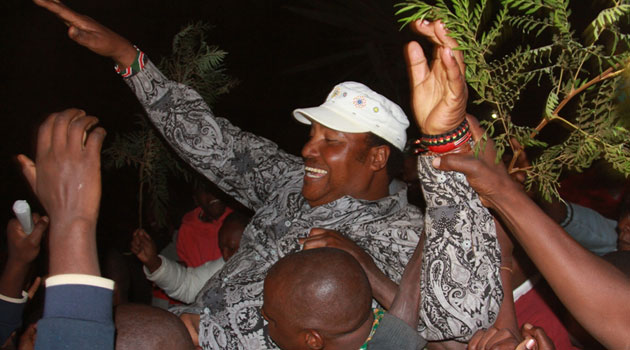 Photo Courtesy:Waititu said should he become the next Kiambu governor, he would adopt an all-inclusive policy/FILE

It was an unexpected extension of an olive branch by Kiambu Jubilee gubernatorial poll winner Ferdinand Waititu to his main political rival Governor William Kabogo, when he said to him Wednesday: “It was not personal Mr Governor.”

This follows a landslide victory for Waititu, who without Juja constituency where counting of votes was still ongoing Wednesday afternoon has garnered 353,604 votes, against Governor Kabogo’s meagre 69,916 votes.

“Those people who have been voted out, Mr Kabogo and his government, we do not have any personal problem with them. If we have any question to ask or even consult them, we shall do it,” Waititu assured.

If elected in the August 8 polls, Waititu says he will run an all inclusive County Government that will be people driven.

Kiambu County being a Jubilee stronghold, it is almost a guaranteed victory for Waititu come the August polls and he says he will not disappoint.

“We shall deliver,” he said amid celebration from a section of his supporters who are camping at the Kiambu High School tallying centre.

“I am a very happy man because the people of Kiambu received a lot of money but decided to vote for the best leaders.”

He lauded the Jubilee Party for “carrying out a free, fair and transparent exercise” that had left all aspirants “contented” with the outcome.

Waititu said his main agenda would be to eliminate poverty in the area and to reclaim “the lost glory of the county.”

“We shall remain united in serving the great people of Kiambu,” he said.

Though he said the exercise was marred by some ‘malpractices’, Governor Kabogo conceded on Tuesday night a few moments after the counting started.

He said the people of Kiambu had spoken, and wished Waititu and his team well.

“I wish Waititu well and to the people of Kiambu, it was worth it,” Kabogo said.

The two arch-rivals have been previously engaged in a bitter legal battle, with counter-accusations of their academic credentials.

Share thisFacebookTwitterPinterestEmailWhatsAppPhoto Courtesy:Waititu said should he become the next Kiambu governor, he would adopt an all-inclusive policy/FILE It wasn’t personal Mr Governor, Waititu says after landslide win It was an unexpected extension of an olive branch by Kiambu Jubilee gubernatorial poll winner Ferdinand Waititu to his main political rival Governor William Kabogo, when he said