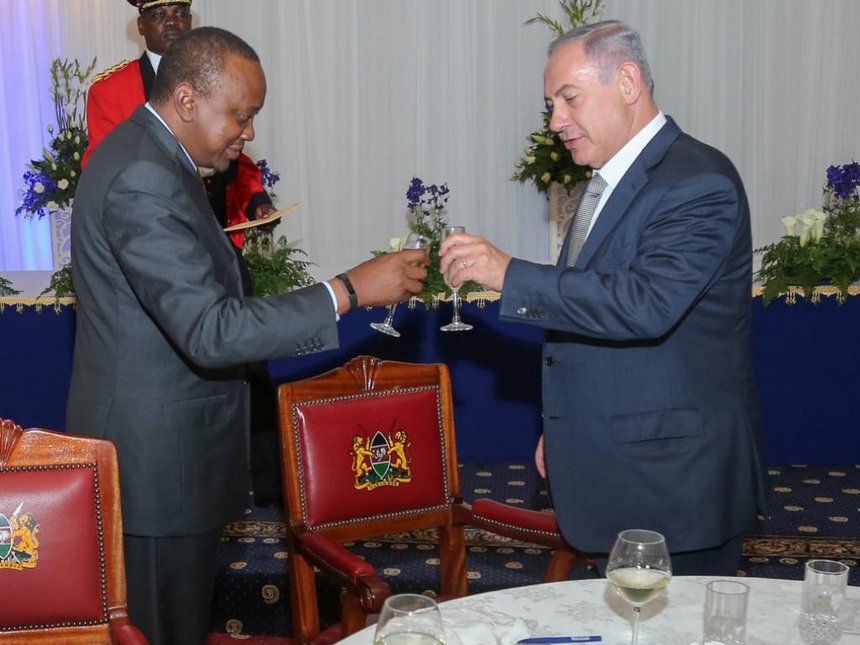 President Uhuru Kenyatta when he hosted a State Banquet in honour of Israel Prime Minister Benjamin Netanyahu and Sara Netanyahu at State House on Tuesday. Photo/PSCU

President Uhuru Kenyatta has said Kenya and Israel will continue to be bound together by a shared vision for a prosperous world.

The two leaders, who spoke when President Kenyatta hosted a State dinner in honour of the visiting Israeli leader on Tuesday, said the two countries consider each other as true allies.

President Kenyatta said Kenya has a lot to learn from Israel, which has achieved so much economically over a short period of time.

“Despite being young as a country, you have become a global leader: in cyber, software, medicine, biotechnology and a wide range of other areas,” he added.

The President said Israeli has been a role model for Kenya in development having made major strides in economic development.

He said Kenya has a lot to learn from Israeli which it considers as a big brother that has shown the way in achieving impossibilities.

“Your story remains an encouragement to my country, and my hope is that as a nation we will adopt many of the attitudes, investments, and strategies that have brought success to your own country,” the President affirmed.

On Kenya, President said the country has become one of the critical economies of the continent.

He cited Kenya’s achievement in creating a favourable business environment, freedom and fortitude which have continued to spur growth.

“Today, we attract enthusiastic investors from across the world, and we are expanding the capacity of our economy through unparalleled large scale investments in every sector—from health, to energy, to infrastructure,” said President Kenyatta.

He thanked Israel for its continued willingness to support Kenya’s economic development as well as its security.

On his part, PM Netanyahu said his visit will forever be a cherished moment to remember.

He said he met with people of different faiths who expressed willingness to partner with his country for a better future.

“There are many pleasurable and good things that this visit evokes,” said the Israeli Prime Minister adding that they regard Kenya as a true friend.

“If you say the word Kenya in Israel, it evokes an immediate positive feeling, am sure that is true of the word Israel to many Kenyans,” said the Prime Minister.

The banquet held at State House, Nairobi, was attended by cabinet secretaries, diplomats, business captains and other senior government officials.

The two leaders were accompanied by their spouses.