What exactly does ODM/Cord want? 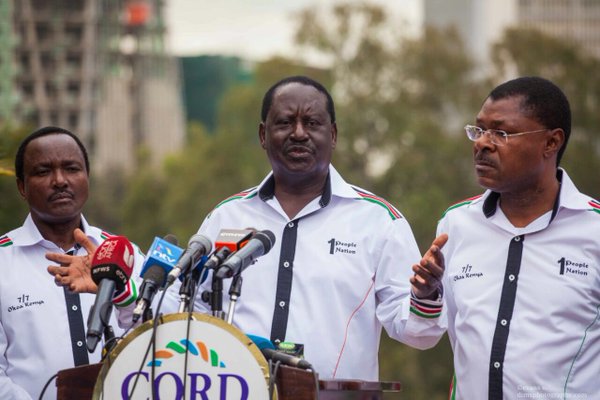 What exactly does ODM/Cord want? :Is Okoa cloaked as dialogue?

Recent events characterised by threats, ultimatums and heightened political rhetoric are an ominous indication that Kenya is headed for turbulent times. Intervention by religious and business leaders, trade unionists, foreign envoys and Kenyans of goodwill saw the President soften his hardline stance when he set up a Parliamentary Committee to resolve the current electoral crisis in Kenya. No sooner had the ink on the President’s signature dried; did Opposition Leader Raila Odinga object to the idea of a Parliamentary Select Committee opting for “dialogue outside Parliament.” The person advocating for dialogue through street protests/riots had in the twinkling of an eyelid become its biggest obstacle.

The question on many Kenyans’ minds now is what exactly does Odm/Cord want? Was the recent brouhaha really about the IEBC or is it just a means to an end? The President had just bent over backwards (against his own gut instinct) to accommodate the Opposition and they had immediately trashed his magnanimity with contempt.Is this yet another power game or are we getting belated glimpses into some of the issues contained in the failed Okoa Kenya referendum attempt? It is not lost upon most of us that pressure on the IEBC was intensified after the failure of Okoa Kenya.At a recent State House meeting unconfirmed reports indicate that Odm/Cord leaders demanded disbandment of both the IEBC and the Supreme Court of Kenya. They also demanded a Parliamentary system of government with an executive Prime Minister and two Deputies failing which they would step up the street protests. A Bill seeking a rotational Presidency fronted by Nominated MP, Zulekha Juma is currently pending in Parliament. Are these attempts at manipulating or arm-twisting through political blackmail? Why has Odm/Cord been so quick to re-in state street protests when avenues for dialogue are still open?

Is the current Opposition putsch then a cry for political inclusion? Is it the voice of a politically oppressed and vanquished? Has it just dawned that the 2017 election is already a lost cause? Ironically, the 2010 national Constitution, a document fronted and supported almost to a man by the opposition has turned out to be the Achilles heel. They opted to support a “winner take all” constitution under a Presidential system confident that they would secure an overwhelming victory in the 2013 election. That was not to be as they were floored by the dynamic duo of President Uhuru Kenyatta and Deputy William Ruto. There are now caught on the wrong end of the stick as Jubilee relishes victory. The Jubilee Coalition with their numerical Parliamentary majority or infamous “tyranny of numbers” have ridden roughshod and thwarted almost every attempt at Constitutional amendment or legislation by the minority.

that the opposition, who as a group won close to half of the votes cast at the 2013 General Election and are regular tax payers, are deeply frustrated and feel excluded from and by government. Jubilee on the other hand is savouring victory and enjoying the spoils in the full knowledge that their detractors would have done the same had the shoe been on the other foot. Cabinet, government and lucrative parastatal positions have been shared out with little regard to the opposition who believe that national resources should be shared equitably. Three major ethnic groups, namely the Luo, Luhya and Kamba are now loudly grousing that they have been left out of Government. They consider the appointments of Cabinet Secretaries Judy Wakhungu, Rachel Omamo, Cleopas Maillu and Eugene Wamalwa as mere window-dressing. It is a situation that had caused severe resentment.The Constitution specifically lays down a procedure for effecting the amendments desired by the opposition. It is however lengthy as it requires a referendum which can only now be held post the 2017 election.

Whatever the outcome of the stand-off it is clear that the opposition’s choice of a path of confrontation and belligerence seriously undermines their interests and will ultimately work against them.

Cord principals addressing the media at Capital Hill. Photo/file What exactly does ODM/Cord want? :Is Okoa cloaked as dialogue? Recent events characterised by threats, ultimatums and heightened political rhetoric are an ominous indication that Kenya is headed for turbulent times. Intervention by religious and business leaders, trade unionists, foreign envoys and Kenyans of goodwill saw