IOC cuts off funding to Kenya, suspension possible next week 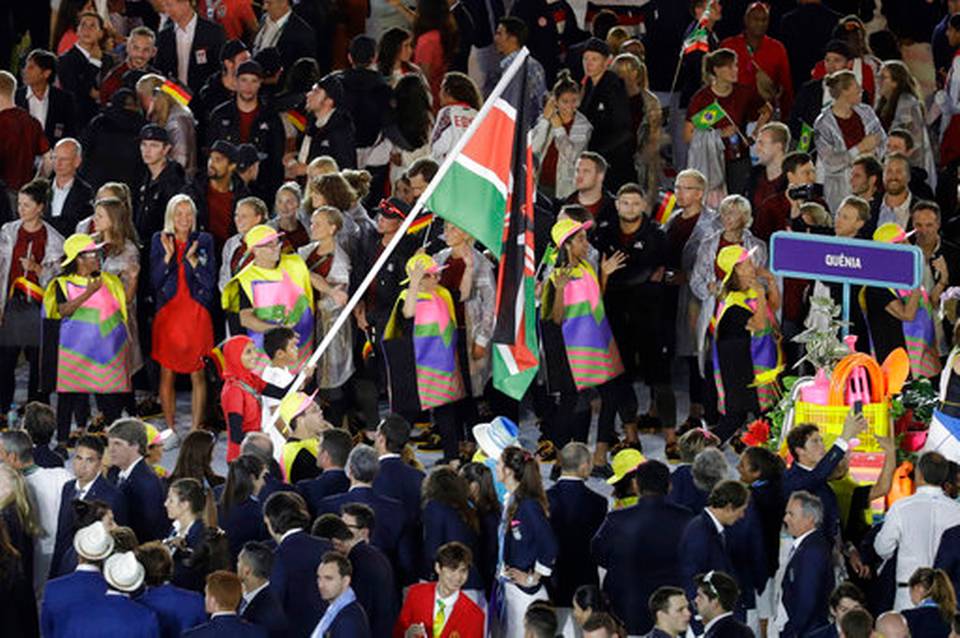 FILE – In this Friday, Aug. 5, 2016 file photo, Shehzana Anwar carries the flag of Kenya during the opening ceremony for the 2016 Summer Olympics in Rio de Janeiro, Brazil. The IOC has cut funding to Kenya and said Thursday, March 9, 2017 it will make a decision over the country’s Olympic future at an executive board meeting next week, when the troublesome track and field power faces the prospect of being banned. Markus Schreiber, File AP Photo

IOC cuts off funding to Kenya, suspension possible next week

The IOC has cut funding to Kenya and said Thursday it will make a decision over the country’s Olympic future at an executive board meeting next week, when the troublesome track and field power faces the prospect of being banned.

The IOC statement came after National Olympic Committee of Kenya executives, led by two-time Olympic champion Kip Keino, defied the IOC at a meeting on Tuesday and refused to make changes to their constitution.

It was the second time in a week where the NOCK failed to adopt governance changes in a new constitution, which the IOC has asked it to do.

Kenya will now be on the agenda of its board meeting in Pyeongchang, South Korea, next Thursday and Friday, the IOC said. The IOC wouldn’t be drawn on whether Kenya’s Olympic committee would be suspended, but did not rule it out.

“The IOC is extremely disappointed by the outcome of the NOC extraordinary general assembly which did not address governance issues in the appropriate way,” the IOC said.

The IOC has now put on hold “all payments of subsidies to the NOC of Kenya” until a decision is made next week, it said.

An IOC ban would mean Kenya would not be allowed to send a team to the Olympics or participate in an IOC-run event while it is suspended. Kenya would also lose its IOC funding for the period of the ban. The one positive for Kenya is that a ban now would give it three years to put its house in order before the next Olympics in Tokyo in 2020.

Kenya is a force in track and field, finishing second behind the United States in the track medals table at last year’s Rio de Janeiro Olympics. But its track federation and Olympic committee have been dogged by scandals since the 2012 Olympics and Kenya has been a major problem for the IAAF, the World Anti-Doping Agency, and now the IOC.

The national Olympic committee needs to be re-formed because it was disbanded by the government in the weeks following the Rio Games amid charges of theft and mismanagement by a string of senior officials, including two vice presidents, the secretary general, and the team leader at the Olympics.

They are facing criminal charges in Kenya after $800,000 and swathes of sports gear provided by sponsor Nike and meant for athletes went missing, according to investigators.

The eye-opening extent of the scandal, and the embarrassment for NOCK, was illustrated in November when vice president Ben Ekumbo, who is also head of Kenya’s swimming federation, was found by police hiding under his bed in an apartment filled with boxes of new Nike running shoes, tracksuits and other equipment. He was arrested and charged with theft.

Kenya also sent two officials home from the Rio Games, the first after he was implicated in a doping cover-up back in Kenya. The other was found using an athlete’s accreditation to gain access to the Olympic Village for the free food, resulting in him being involved in a farcical mix-up over a doping test.

Since the disbanding, the IOC and the Association of National Olympic Committees of Africa have been trying to piece Kenya’s Olympic committee back together.

But at Tuesday’s meeting, the 13 members of the NOCK executive committee voted against constitutional changes, which needed a two-thirds majority to be passed. The 19 sports federations affiliated to Kenya’s Olympic committee voted for the changes, but their votes weren’t enough.

IOC observers left that meeting without commenting, but Kenyan track federation official Barnaba Korir said the country was in trouble.

“The observers looked very upset and my fear is Kenya is in for a big problem,” Korir said.

IOC cuts off funding to Kenya, suspension possible next week Reviewed by samrack on March 9, 2017 .

Share thisFacebookTwitterPinterestEmailWhatsAppFILE – In this Friday, Aug. 5, 2016 file photo, Shehzana Anwar carries the flag of Kenya during the opening ceremony for the 2016 Summer Olympics in Rio de Janeiro, Brazil. The IOC has cut funding to Kenya and said Thursday, March 9, 2017 it will make a decision over the country’s Olympic future