Inside the Sh47bn criminal network that runs matatus 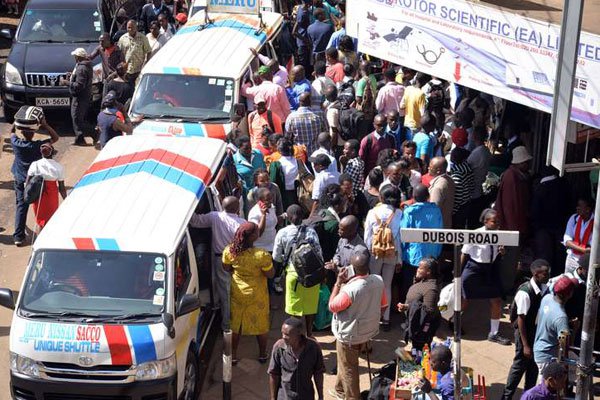 Inside the Sh47bn criminal network that runs matatus

Kenya Bus Service Management Managing Director Edwins Mukabanah says public service vehicle (PSV) owners who do not bow to this brutally ravenous cartel are either pushed out of business or forced off lucrative routes.

As a result, many opt out as others remain hostage to the syndicate.

“If you add up all the money we lose to the cartel and the lengthy compliance requirements that come with running a matatu, you can see why even the oldest operators have never grown to become multinationals despite the fact that this is a multibillion-shilling industry that is always lucrative,” Mr Mukabanah said.

“Our crews are under siege and matatu owners are left with almost nothing, not even enough to properly maintain the buses. That is why many quit.”

Rogue traffic police officers and county askaris, illegal gangs and route cartels make the deepest cuts into the PSVs’ revenues, with each group collecting at least Sh200 from the 120,000 matatus daily.

This means each group pockets some Sh8.6 billion a year, although stakeholders believe the figures could be much higher, as some routes pay charges running into thousands of shillings.

RUINING INDUSTRY
So normalised is this theft and extortion that new vehicle owners often have no qualms about paying a “fee” to join a route or be allowed to pick up passengers from a designated terminus.

Investigations by the Nation show that bus owners part with between Sh30,000 and Sh100,000 to launch operations on a route.

Gangs on some routes — such as No. 102 to Dagoretti and Kikuyu — demand the new vehicle for their exclusive use for some time before the owner can start earning from it.

They also dictate who will be part of the crew of a vehicle before sanctioning its operations.

Matatu Owners Association chairman Simon Kimutai said the extortion ring runs deep in the sector and the crews are usually caught up in the web, cooperating to save their lives as those who fail to comply are harassed out of business or even killed.

He, however, rejected claims that PSV operators are responsible for feeding the cartel, which has given the business a bad name.

“Who wants to just give money for free?” Mr Kimutai asked.

“Even the crew would rather keep it for themselves. But they are compelled by the system of extortionists backed by the police.

“They are helpless. Otherwise, how do you explain the role of idle men at a terminus? As a matatu owner, I would not just gamble with a Sh5 million investment.

“But I can tell you for a fact that they have totally diluted the business.

“We are left with the major expenses such as insurance and repairs, while the bulk of the harvest is scattered across the extortion ring.”

POLICE COMPLICIT
The cartel has disrupted order in the public transport system, encouraging lawlessness and providing protection to law-breaking crew at the various terminuses and bus stops.

They are also known to be on standby to deal with any passenger “causing trouble” to the conductors by demanding civility or respect.

At the Railways bus terminus in Nairobi, matatus reverse into the Haile Selassie-Moi Avenue roundabout as traffic police watch.

One crew member explained to us that once the required fees have been paid, they are allowed to pick up passengers from any point at the roundabout.

“Policemen come here at 5am and they immediately start collecting the funds until about 9am,” said the informer, who requested anonymity for fear of reprisals.

“Each bus has to pay Sh200 first, and that is the standard rate.

“If you don’t pay, then the debt piles up and you risk being arrested for any charges because, even the way this terminus is structured, it cannot hold all these vehicles.

“So, either way, you will be dropping off or picking up passengers at the wrong place.”

At the Eastern Bypass-Thika Superhighway junction in Ruiru, matatus block the road for hours; at Roysambu, right across from the Kasarani divisional police headquarters, they pick up and drop off passengers on the highway, creating a traffic mess that often leads to accidents; and at Ngara they occupy the highway.

In all these cases, police feign ignorance of the blatant disregard of traffic rules and regulations.

Each route has a special representative who collects the “fees” on behalf of the police.

At Railways, a well-built, bald-headed man stands near the traffic police and occasionally dashes to the driver’s window of a few buses to collect money.

He represents Route 4W — to Satellite and Kabiria.

Once full, the buses leave to different routes, where the stage touts wait for their cut.

A crew of two is always stationed near estate routes to take over the bus as the driver and conductor take a break.

This is a deliberate strategy to allow the touts, through what is commonly known as a “squad” run, to make money as the fare collected during this round trip in the estates is usually retained by the temporary crew.

During the recent vetting of traffic police officers, the National Police Service Commission was shocked to learn that an officer transacted more than Sh35 million through his M-Pesa account in one year.

Last October, a police officer earning an average of Sh35,000 a month attracted the attention of the Ethics and Anti-Corruption Commission for having deposited Sh33 million into his bank accounts in two years.

Constable Jamal Bare Mohamed of the Thika traffic police department was among 34 junior officers alleged to have received millions of shillings over the previous two years in bribes, according to EACC investigators.

Mr Mukabanah says the reduced income is to blame for the poor maintenance of vehicles as the owners cannot afford the cost of repairs.

Asked how the matatus can afford the expensive graffiti, music, television and even Wi-Fi and still operate, the KBS boss said a majority of the highly “pimped” vehicles are those operating for the sake of it, but largely in money laundering.

“I have been in this business for more than 30 years and I can tell you for sure that you cannot invest an extra Sh250,000 to decorate a matatu and make a profit,” Mr Mukabanah said.

“This industry has no entry rules. So those who want to cleanse illegally acquired money prefer to be in it.”

Inside the Sh47bn criminal network that runs matatus Reviewed by samrack on January 5, 2017 .