Inside the battle for control of Michuki’s multibillion empire 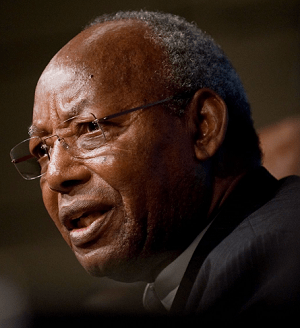 Inside the battle for control of Michuki’s multibillion empire

Two weeks ago, former Kiambu governor William Kabogo was driving out of the Windsor Golf Hotel residential area when he was stopped by picketing workers claiming to be employees of the late John Njoroge Michuki business flagship – Windsor Golf and Hotels.

They held twigs and placards that read: “Windsor pay us our final dues”, “Windsor we have suffered enough”. When Michuki was alive, this Victorian-themed hotel with 130 rooms was touted to be one of the best in the region with its 18-hole golf course. Such industrial action would have been unheard of.

For months now, the once vibrant Windsor Golf – the winner of several global awards – has been suffering thanks to incessant family wrangles and pushed to the ground by Covid-19 pandemic. How much damage the two unrelated events will dent the Michuki empire depends on how fast the family could settle the only barrier that is easier to jump – end the wrangles silently playing out in the High Court and settle for a win-win formula. But I am not their lawyer, though.

For starters, Michuki’s youngest daughter, Yvonne Wanja, is in court demanding valuation of the multi-billion estate and she is demanding her rightful share in a series of documents filed in court. Also, eight years after the grant of probate was issued, the same has never been confirmed by the courts – thus sinking the estate further into confusion, according to court papers.

In court, in a case filed in 2012, Wanja has been blaming her two siblings of running down Windsor and accruing huge debts and claims that both Anne Mutahi and Fred Chege “have failed to administer the estate in a proper manner” and that “the beneficiaries have failed to agree on the estate’s future.” Other late Michuki’s children are Martin Michuki, Francis Murai and Sheila Murugi.

The allegations are contained in an affidavit filed two years ago and in which Michuki’s youngest daughter Wanja claims that she has been “excluded from discussions with other beneficiaries with regards to the estate.” She was also demanding forensic audit of Nairobi Golf Hotels Limited and Mika Holding which owns Windsor Golf and Hotel. Mika Holding is in-charge of property development within Windsor.

The appointed estate administrator, Ms Mutahi, denies allegations by her younger sister that the estate is being run down and that they want to short-change her: “Wanja’s allegation that she is financially exploited by her siblings is illusionary, intended to not only tarnish our names but also mislead the court,” Ms Mutahi, the eldest in the family, says in an affidavit.

When he died on February 12, 2012, Mr Michuki was one of the most respected Cabinet ministers and carried himself in public with a strict near-authoritarian demeanour that earned him friends and foes in equal measures.

When he wrote his will in 1973, Mr Michuki had named his wife Josephine Watiri, together with then East African Breweries executive Kenneth Matiba, as the executors of the estate.

According to court papers, he had left all his personal chattels to his wife and then left 50 per cent of his estate to his wife while the other 50 per cent was to be shared by his children in equal shares.

Thus the grant to administer the estate was given to Ms Mutahi and Fred Michuki in March 2013 by Justice Luka Kimaru. On the same day, they were also granted powers to administer their mother’s estate. A legal advisory in court indicated that in both wills, the children were beneficiary to the estate in equal shares.

But by the time Wanja went to court, thus unmasking the trouble within the family, she was asking the court to intervene since Windsor had incurred “substantial and unsustainable liabilities” and that her siblings, who were co-directors before she resigned – “had neglected, despite several requests, to mitigate the same.”

Court records are now pointing to much more sibling trouble in the Michuki empire. For instance, there seems to be an issue with the will of Michuki’s wife since her daughter, Sheila, has filed an affidavit denying claims by Wanja that she “forced her (mother) to sign documents.”

“This is another complete falsehood. If (Wanja) continues to make and publish such false allegations, I shall have no alternative but to sue her for defamation,” Sheila says in a replying affidavit dated April 2019.

After the death of John Michuki, it now appears from the court records that Mrs Michuki wanted to update her Will, according to lawyer Raphael Ng’ethe – who was handling the matter,

“She brought to my office some notes for discussion towards updating of her will. Thereafter, we met on one occasion but did not conclude or finalise our discussions to enable me draft her new will. Unfortunately, she passed away in August 2012,” a witness statement in the court records reads.

Shortly after her burial, Mr Ng’ethe met the six siblings and “I mentioned to them of their mother’s intention to update her will. I gave them the note…I advised them that the note is not a will and the valid existing will is dated June 24, 2009.”

That will, or lack of it, is now at the centre of the family wrangles.

But as it emerges from the records is that Michuki was not the absolute owner of Windsor – he held 76 per cent shareholding through Fairview Investments Limited and that 24 per cent of the shareholding was owned by Windsor Group.

Faced with two wills that had not been executed, it appears from court records that the siblings faced a dilemma. Perhaps, not. They sought legal advice: “The issue now falling for consideration is how best to allocate the assets given the complex structure and also to ensure that any duty or tax waivers are enjoyed by the beneficiaries.”

“In incorporating various companies and registering various properties in their names, the late Mr and Mrs Michuki obviously had common objectives as the absolute joint owners of the companies. Upon their demise, however, their shares in the various companies would, as per the respective wills, revert to their children equally,” says an opinion in the court documents.

But the court records point to internal wrangles on how to manage the various properties, service the existing loans and fit in the shoes of the patriarch – who appears to have run the estate without any trouble.

Wanja had claimed in her court papers that companies associated with her siblings were taking loans from Fairview Investments. She named Biashara Factors Limited whose executive is Ms Mutahi, the Michuki estate administrator. By Mrs Mutahi denies getting the money in her personal capacity. “It is not true that I have been advanced any money by the estate. However, a company, namely, Biashara Factors Limited has borrowed from Fairview Investment Limited. The fact that I communicated as the executive director of Biashara Limited does not mean that I borrowed money in my personal capacity. In any event, my business did not borrow any money from the estates of our parents.”

One of the proposals that had been put on the table was to dispose some of the assets and settle debts and professional fees and to contract a forensic audit on the estate.

On the alleged mismanagement, Sheila opines in her statement: “The borrowing from the family companies and the general management of the said companies is a matter for the directors, shareholders and management to resolve within the provisions of company and commercial laws.”

“I find it very unfortunate for Wanja to accuse the administrators of failing to disclose assets of the estate…she has, instead of supporting the administrators, engaged in a concerted process to derail the court and delay the confirmation of grants of probate and distribution of assets as per our parents Wills.”

The battle for the Michuki estate is now pending in the courts where Wanja has filed applications for the revocation of grants issues in respect of Mr and Mrs Michuki’s estate.

Inside the battle for control of Michuki’s multibillion empire Reviewed by samrack on December 1, 2020 .

Share thisFacebookTwitterPinterestEmailWhatsAppInside the battle for control of Michuki’s multibillion empire Two weeks ago, former Kiambu governor William Kabogo was driving out of the Windsor Golf Hotel residential area when he was stopped by picketing workers claiming to be employees of the late John Njoroge Michuki business flagship – Windsor Golf and Hotels. They held twigs