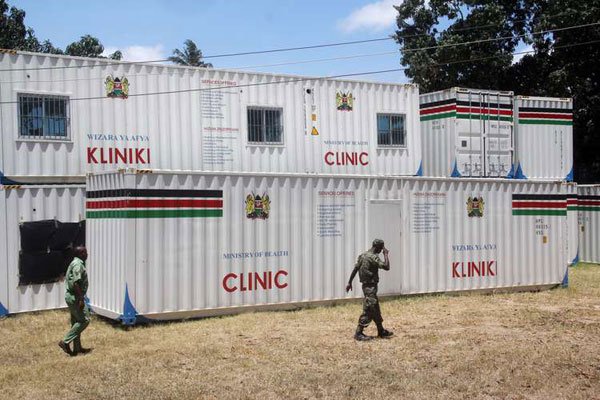 Some of the 99 mobile clinics imported from China by Estama Investments that are stored at the NYS yard in Mombasa. PHOTO | LABAN WALLOGA | NATION MEDIA GROUP

Ninety-nine mobile clinics are lying at the National Youth Service yard at Miritini in Mombasa County, six months after they were imported from China.

A source who cannot be named as they are not authorised to speak to the media said the first 40 containers were taken to the yard late last year and the others in June this year.

“They were 100 in total but one was taken to Nairobi for demonstration purposes. The others were supposed to be distributed to urban centres but directions are being awaited from the Health ministry,” said the source.

Contacted on Sunday, Principal Secretary Nicholas Muraguri declined to say when the clinics would be distributed.

“I am in a noisy place, please let me get back to you later,” he said and hung up.

Subsequent calls were not answered.

The containers have a consultation room, a pharmacy, a laboratory and a toilet. They also have electricity fittings.

The lengthy stay of the containers at the yard has brought to light new revelations on the Sh5.2 billion health scandal.

It has thrust Estama Investments Limited, which was awarded the Sh1 billion tender to supply the clinics, into the limelight.

A company director, Mr Njage Makanga, said the corruption allegations were “a figment of a fertile imagination without any iota of truth”.

“I am ready to show anybody who is interested where the mobile clinics are,” Mr Makanga said.

On Sunday, Mr Julius Ogogoh, the executive director of Human Rights and Justice, a Mombasa NGO, asked why the containers had been left at the yard for so long.

“They have been there for almost a year now. Something is fishy here. People must come out and talk. We cannot keep mum while the government faces one scandal after another. When will we progress as a nation?” said Mr Ogogoh.

Contacted, Health CS Cleopa Mailu said: “We have confirmed that the contract to supply 100 portable clinics was awarded to Estama Investments on July 17th, 2015, having been the joint lowest bidder. We, hereby, also confirm that the company provided the requisite tax compliance certificate as well as its PIN certificate as required during the procurement process.

“The company has supplied all the clinics as required in the contract and has since been paid up to Sh800 million. In this regard, the outstanding balance is Sh200 million,’ he said.

“The containers have been cleared and handed to us. They are being held in a government facility and we are not incurring storage costs. We will move them to the relevant sites once certain facilities like power connection and water are in place. It is actually an issue of logistics, not failure to deliver,” said the CS.

Imported clinics from China lying at NYS yard Reviewed by samrack on October 31, 2016 .

Share thisFacebookTwitterPinterestEmailWhatsAppSome of the 99 mobile clinics imported from China by Estama Investments that are stored at the NYS yard in Mombasa. PHOTO | LABAN WALLOGA | NATION MEDIA GROUP Imported clinics from China lying at NYS yard Ninety-nine mobile clinics are lying at the National Youth Service yard at Miritini in Mombasa County, six