I’m a survivor, KNH nurse says cancer can be defeated 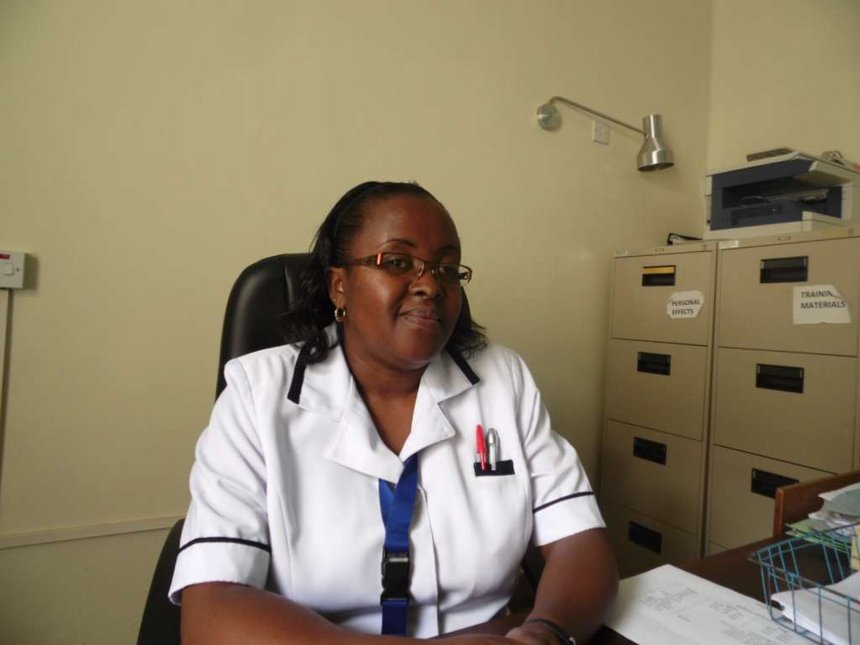 I’m a survivor, KNH nurse says cancer can be defeated

During the ten years Julie Matiba nursed children with cancer at the Kenyatta National Hospital, she witnessed just how the disease can take its toll on the body, sometimes gruesomely.

Treatment to fight cancer was also aggressive. It was mostly chemotherapy, surgery and sometimes radiation. In many cases, more than one of these treatments was used.

Now, Julie hoped the same treatment would kill the tumor cells lurking under her armpit.

She had been diagnosed with non-Hodgkin lymphoma, a rare cancer that develops in the lymphatic system, the glands that form part of the body’s immune system.

It is now six years since Julie was declared cancer-free. She has also moved from KNH’s children’s ward to the reproductive health department as a senior nursing officer.

But she continues to encourage cancer patients with her experience, both as a medic and as a survivor. She also helps fight stigma, especially after rumours spread that she had “contracted” cancer from the children.

Julie’s problem started with an indolent swelling under her armpit. “It was painless, but every time I pushed a patient on a trolley, I would feel numb,” she says. “The doctor carried out some tests but they didn’t show anything. He decided to remove it.”

SURVIVOR: Julie Matiba in 2008 when she lost all her hair during her treatment.

The mass has spread deeper into her body, but it was completely removed early 2008. “My doctor at KNH was very concerned and he personally took the growth to the laboratory. The pathologist said he could tell it was cancerous but could not establish which cancer it was.”

A sample was later sent to South Africa for further examination. “They needed to establish the type of cancer to design the treatment,” she says. “The results returned from SA after two weeks, showing non-Hodgkin lymphoma.”

Julie says working with cancer patients for a decade did not prepare her for the grim news of her own cancer diagnosis. “ I received the SA results in March 2008 as I was going to bury my aunt who died of breast cancer. I was left in tears. I disclosed it to my husband but took time before I could tell others.”

Her father had died of throat cancer in 2003. Julie says rumours soon spread that she might have “contracted” cancer from the children’s ward, where she worked as a nurse.

This was false because a healthy person cannot “catch” cancer from someone who has it.

There is also no evidence that close contact or talking to, playing with, or hugging someone with cancer can spread the disease, because cancer is not caused by germs like colds or the flu are.

He colleagues were also counseled because while it is plausible that chronic exposure to chemotherapy agents on the job can cause some sickness, KNH has strict safety guidelines in place.

“When I started treatment, I didn’t see light at the end of the tunnel. But people supported me, including a friend who had colo-rectal cancer.”

“Support from family and friends is very important – not just financial support. People need to feel wanted not on a death bed. People also need to look up to God, “ she says.

Julie experienced the dreaded side-effects of the treatment. This is because while chemotherapy drugs kill cancer cells, they may also damage healthy cells.

Not everyone experiences these side effects in the same way.

Her treatment at KNH began mid 2008 and ended early 2009. A battery of tests have since confirmed she is indeed in remission. That means the cancer been successfully eliminated and she no longer has any signs in her body.

“What limits survival is late presentation, late diagnosis and management. The referral system takes long to get diagnosis and treatment,” he says.

“Sometimes the patient might cascade in the health system for six months or even one year. But this is not peculiar to Kenya, even the developed world has these issues.”

There are no central statistics for cancer survival rates in Kenya, but in the UK for instance, survival varies between cancer types, ranging from 98 per cent for testicular cancer to just one per cent for pancreatic cancer.

If a patient is diagnosed early, the chance for successful treatment is always high.

A five-year survival rate is used for cancer. That does not mean the disease cannot recur beyond five years. Certain cancers can recur many years after first being found and treated. For some cancers, if it has not recurred by five years after initial diagnosis, the chance of a later recurrence is indeed small.

Dr Njuguna says prevalence of cancer in Kenya has also been rising. KNH receives between 60 and 80 new cancer cases every week.

This largely due to improved awareness and diagnosis, he says.

Environmental factors including viral infections during childhood, and diet, may also trigger new cases. “Diet is of a lesser strength in terms of proof,” he says. Other preventable causes include smoking, alcohol use, lack of exercise and high intake of refined carbohydrates.

The World Health Organisation says at least one-third of all cancer cases are preventable and this offers the most cost-effective long-term strategy for the control of the disease.

The organisation adds thatvaccination against hepatitis B and C can preventliver cancer, HPV vaccine cervical cancer while treatment of the bacterium Helicobacter pylori can lower the risk of stomach cancer.

“We have radiation training at diploma level while the University of Nairobi has an oncology masters programme here for nurses,” he said.

He admits cancer treatment is expensive, but KNH offers subsidised rates. He attributes the cost to the expensive equipment and drugs.

Julie was lucky that her entire treatment was heavily subsidised because she is a KNH employee.

She says her experience proves cancer can affect anyone, including health workers. She encourages women to seek recommended testing for breast and cervical cancers saying it can stop future cases and reduce many unnecessary deaths.

“Mine is a testimony that if detected early, cancer is indeed treated successfully,” she says.

I’m a survivor, KNH nurse says cancer can be defeated Reviewed by samrack on February 12, 2017 .

Share thisFacebookTwitterPinterestEmailWhatsAppGRATEFUL: Julie Matiba last week. She underwent successful treatment at KNH. I’m a survivor, KNH nurse says cancer can be defeated During the ten years Julie Matiba nursed children with cancer at the Kenyatta National Hospital, she witnessed just how the disease can take its toll on the body, sometimes gruesomely. Treatment to fight