The IEBC has changed the date for fresh election which it had set as October 17 – The repeat poll will be held on Thursday, October 26 – IEBC says the move has been necessitated by the changes needed after the Supreme Court delivered its full judgement on Wednesday, September 20 – The court nullified the presidential election on its ruling made on September 1 The Independent Electoral and Boundaries Commission (IEBC) has pushed back the dates for the fresh election ordered by the Supreme Court on Friday, September 1.

In order to ensure that the commission is fully prepared to deliver an election that meets the standards set out by the Supreme Court, we wish to notify the public and all stakeholders that the fresh presidential election shall now be held on Thursday, October 26,” IEBC said. 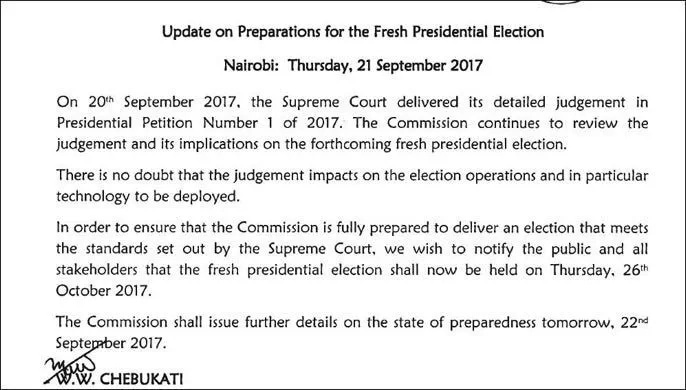 The October 17 date had been contested between NASA and Jubilee party, with the former opposing it while the latter welcomed it.

Jubilee party said the date would not interfere with the national exams calendar while NASA leader Raila Odinga said candidates will not die if the exams are postponed. KIEMs kits provider OT Morpho had also asked the date to be pushed back to allow it to configure the kits. Education CS Fred Matiang’i said they are prepared for any eventualities but he is yet to issue a statement on the way forward following the latest development. READ ALSO: Chiloba, Chebukati breath easy after Supreme Court full judgement KCSE exams are scheduled to start in October 23. The change will likely impress NASA who are also demanding removal of some officials from the commission on grounds they bungled the election. Among them is CEO Ezra Chiloba. However, the Supreme Court failed to implicate any official in the bungled election.