I will form my government even from exile, says Raila 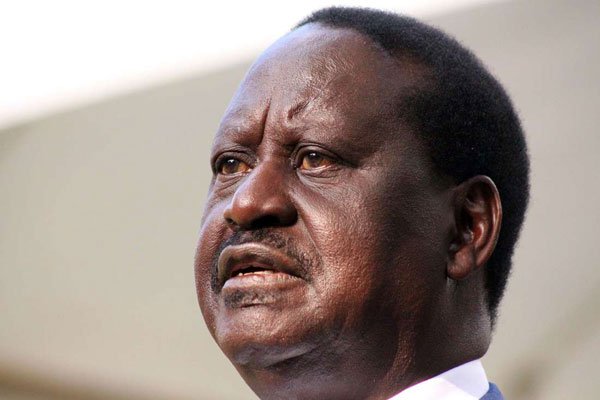 Opposition leader Raila Odinga addressing a press conference at the Okoa Kenya Secretariat in Nairobi, on October 31, 2017. He has said that his swearing-in as people’s president will go on. PHOTO | DENNIS ONSONGO | NATION MEDIA GROUP

I will form my government even from exile, says Raila

Opposition leader Raila Odinga has vowed to form a rival government when he is sworn in on January 30 even if it is based outside the country.

He spoke as 13 opposition MPs said they will have all the National Super Alliance (NASA) affiliated lawmakers to support the oath by swearing affidavits declaring they will only recognise Mr Odinga as president.

In an interview with Voice of America, the opposition leader said his oath of office will be based on the results of the August 8, 2017 election, which he claims he won.

He said he will form a cabinet and run a government even if it will be from exile.

“This is no joke. An illegitimate government is in office, and the one that the people actually wanted to be there is outside. On January 30, we will end this. We will be sworn in with the August 8 results that shows we won,” he said.

President Kenyatta has warned that the law will take its course if Mr Odinga acts against the Constitution while Attorney-General Githu Muigai has said the oath will attract a charge of treason, which attracts the death penalty.

On Wednesday, the AG said he has to listen to the interview before responding. “I will listen to it and come back to you,” he said on the telephone.

In the August 8 election, the Independent Electoral and Boundaries Commission (IEBC) declared President Kenyatta the winner with 8,203,290 votes (54 per cent) followed by Mr Odinga’s 6,762,224 (43 per cent). Nasa declared the election a sham and went to court to have it nullified.

At that time, the opposition believed that the entire election was tainted by “non-compliance, irregularities  and improprieties” and did not ask the Supreme Court to order a manual recount of the votes which would have established if there was an error — or manipulation of computers — in declaring Mr Kenyatta the winner.

Instead, Nasa asked the court to quash Mr Kenyatta’s win and order a fresh election. The Supreme Court found in favour of the opposition and ordered a repeat poll, which Mr Odinga boycotted, citing lack of electoral reforms.

The Nasa leader says his January 30 oath is a protest against what he terms lack of electoral reforms and the failure by Jubilee to initiate dialogue over it. Asked what he will do after the oath, Mr Odinga said he will form a government.

“We can even be a government in exile, one that works from outside. It has happened in other countries. What we are saying is that Kenyans can no longer allow an illegitimate government not elected by the people to rule them. We will work like a government, we will form a Cabinet and we will work as a government,” Mr Odinga said in the Swahili interview recorded at his Capitol Hill office, Nairobi, on Tuesday.

Mr Odinga dismissed as far-fetched claims of differences between him and his co-principals Kalonzo Musyoka, Musalia Mudavadi and Moses Wetang’ula.

Nasa insiders say the three principals have called for a stop of the swearing-in ceremony, preferring dialogue to avoid the confrontation that would come with taking the presidential oath when President Kenyatta has already been sworn in. But Mr Odinga said the Nasa team is fully behind him.

“There is no rift in Nasa at all. No problems whatsoever. My brothers are fully behind the course,” he said.

On disagreements over the sharing of parliamentary committee leadership positions in the coalition, Mr Odinga said the differences were normal.

“In a large family like Nasa, these things are bound to occur. There will be cases where one family is demanding a fish and vice-versa. That is normal,” he said.

Yesterday, it emerged that two meetings by the Nasa principals had not yielded fruits over the swearing-in ceremony and that they had scheduled a retreat on Friday at Maanzoni Hotel in Machakos.

At Parliament Buildings on Wednesday, 13 lawmakers led  by Kakamega Senator Cleophas Malala and National Assembly Minority whip Junet Mohammed started a campaign that they said would see all the coalition’s MPs, governors and MCAs sign a legal instrument binding them to a resolution to swear in Mr  Odinga and Mr Musyoka as “people’s president” and deputy. Nasa has 154 law makers — 127 MPs and 27 senators.

The MPs said they do not recognise Mr Kenyatta as President.

“We are bound by a solemn belief in the sanctity of the vote and respect for the democratic will of the people. And we stand here before you to say enough is enough. Enough with “accept and move on”. Enough with Jubilee’s electoral theft. Enough with the diplomats and their dialogue. Kenyans want nothing short of electoral justice,” said Mr Malala.

“It is in this spirit that we as elected leaders representing the people have resolved to come together to further demonstrate that we do not recognise Uhuru Kenyatta as President,” he said.

However, none of Wiper and Ford-Kenya MPs attended the press conference that came just a day after the coalition’s four principals failed to agree on the modalities of the oath after two days of secret meetings.

The leaders first met on Monday at Karen Country Club and at a private residence in Lavington on Tuesday. In the affidavits, the leaders recognise Mr Odinga as the people’s president, having been elected as the president during the August 8 presidential election. They affirm that the poll, won by Mr Kenyatta, was not free, fair, transparent or verifiable.

The affidavit further trashes the October 26 repeat presidential election as a nullity because it was conducted by an electoral commission that was in contempt of the Supreme Court orders and that it was not conducted in strict compliance of the constitutional provisions and all other applicable laws.

“Had the IEBC complied with the Supreme Court orders and provided access to its servers, the results would have shown that the winner of the first presidential election was Mr Odinga,” the affidavit reads.

However, during yesterday’s press conference both Mr Malala and Mr Mohammed rejected claims of disquiet in the coalition over the oath and the manner in which the committee leadership positions reserved for the opposition parties had been shared out.

“There is no fallout in the coalition and nobody has been forced to sign the affidavit. It is one of our programmes to ensure the swearing-in ceremony takes place,” said Mr Mohammed.

Mr Odinga, on the other hand, told VOA that while foreign diplomats were welcome to help Kenya as friends, the current stalemate could only be addressed by Kenyans themselves.

“This is a fire that is for us Kenyans to put out. We have stated our agenda for dialogue.” he said.

“If they do not, sisi hatubembelezi mtu (We will not plead with anybody). We will do our things, let them do theirs and then we will see where we will meet,” he said and warned the envoys to keep off the push for dialogue, accusing them of siding with Jubilee.

Mr Odinga is particularly upset by US ambassador Robert Godec who recently asked Nasa to drop the “unconstitutional” swearing-in for a structured dialogue.

“They are our friends but they cannot force us. Kenya is not a colony of America. We are a free country. We will do as we want. It is not us Nasa that have breached the Constitution because they have created an illegitimate government,” he said.

I will form my government even from exile, says Raila Reviewed by samrack on January 17, 2018 .