HOW KNH INTERN HAS BEEN ‘TREATING’ OXYGEN SUPPORTED PATIENT AT HOME 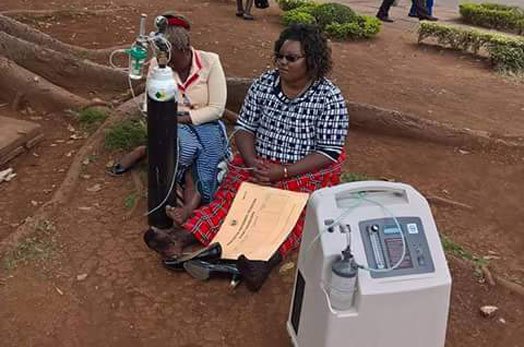 HOW KNH INTERN HAS BEEN ‘TREATING’ OXYGEN SUPPORTED PATIENT AT HOME

By EVELYNE MUSAMBI
Kenyans were on Tuesday morning treated to a shock after generously contributing Sh8million to a lung patient’s treatment in India.

Gladys Kamande has had to carry oxygen cylinder wherever she goes after she developed a stomach growth and her lungs collapsed in 2010.

After a successful online fundraiser to aid her treatment in India, the campaign drive’s manager Ndugu Nyoro called for a meeting with family and the medic who had been attending to Ms Kamande.

Mr Nyoro probed the medic, one Samson Buluma, on the choice of Artemis Hospital as well as the treatment plan.

“I realized my friend was not straight forward in his responses. I asked him how he arrived at his hospital of choice and the treatment plan. He could not respond. I asked if he considered other super specialty hospitals that could offer better services. He didn’t have a convincing response. He could not table documents of his correspondence with the said Artemis Hospital. How did he, a CO (clinical officer), arrive at all these without the input of KNH consultants. He fumbled. At that point I felt there was a problem,” said Mr Nyoro.

Mr Buluma had reportedly introduced himself as a clinical officer at Kenyatta National Hospital to the patient’s family and had been taking care of her at home with daily injections.

“In a bid to cover my investigations, I asked my friend Chebet to call KNH as we embarked on a mission to understand who Buluma was. The first call went to Dr Wafula, head of Respiratory Unit. Ideally, this is the unit where Gladys matter would revolve around. Dr Wafula said he has never heard of such a character. He told us the guy could either be a masquerader, a quack or an intern. But he expressed fears on the daily injections the patient was receiving at home,” wrote Mr Nyoro.

It was then that Mr Nyoro and his friend Chebet made a formal inquiry to the referral hospital.

“Yesterday (Monday) Chebet and I were called to a meeting with Dr Githae and a Mr Jared. Besides confirming our fears in official response (letter attached) they have the following to say; Buluma is an intern at KNH and is supposed to rotate in clinics under supervision till Feb 2017; He is not allowed by law to touch a patient or practice with supervision by the senior clinician; He was masquerading to be a clinician and in the event something went wrong KNH would not be liable for any damages,” wrote Mr Nyoro.

The funds drive manager and the family are now in consultation with the national referral hospital to review the patient after the development that she had trusted an intern with a critical illness after which a recommendation will be made on the best treatment plan.

HOW KNH INTERN HAS BEEN ‘TREATING’ OXYGEN SUPPORTED PATIENT AT HOME Reviewed by samrack on December 20, 2016 .

Share thisFacebookTwitterPinterestEmailWhatsAppHOW KNH INTERN HAS BEEN ‘TREATING’ OXYGEN SUPPORTED PATIENT AT HOME By EVELYNE MUSAMBI Kenyans were on Tuesday morning treated to a shock after generously contributing Sh8million to a lung patient’s treatment in India. Gladys Kamande has had to carry oxygen cylinder wherever she goes after she developed a stomach growth and her lungs