How I met my dream lover

by samrack
in Kenya, News, Relationships
A A
0

Roselyn and Timothy Odero met when he went for a job interview where she was the interviewer. Love blossomed soon after. PHOTO| COURTESY

Love can find you in the most mundane or interesting or strangest of ways, when you least expect and without any initial fireworks.

Love is anywhere and everywhere; you never know when an act of synchronicity will happen to set the stage for a beautiful romance and a happily ever after.

Three couples share the stories of how they met each other, in ways that they hadn’t anticipated. 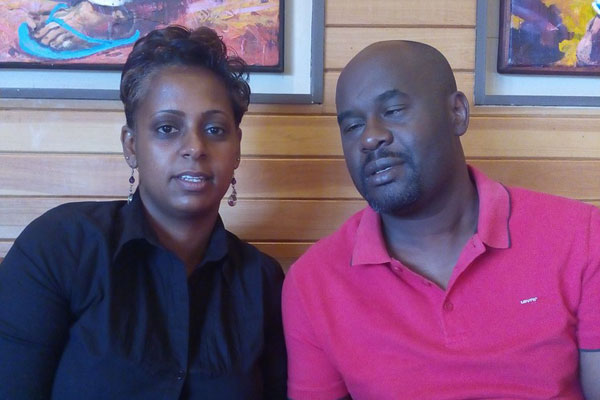 Watching Geoffrey and Rubina interact one might be fooled into thinking that they are dating or newly-weds. The chemistry still seems so fresh 19 years into their marriage. PHOTO| COURTESY

Watching Geoffrey and Rubina interact one might be fooled into thinking that they are dating or newly-weds. The chemistry still seems so fresh 19 years into their marriage.

The story of how they met is interesting.

One morning, 19 years ago, Rubina was working as a dental hygienist when Geoffrey who was having a bad toothache came in for a root canal. He was afraid of the procedure and the then 18-year-old Rubina held his hand to calm him.

She knew that he was up to something when he came for the next part of the procedure four days later and he insisted that she attend to him.

Soon after, she left this job and they lost contact. When he bumped into her six months later, he made it clear that he wasn’t taking any chances with her and made sure that she took him to her new workstation where he would regularly drop in on her. It didn’t take long for her to see that he was a good man.

“I was raised in a strict Muslim home. I hadn’t heard of couples dating. Usually, you met, went home to the parents, got married and only came to know each other in marriage. When I told Geoffrey this he was shocked,” she recalls their first hurdle.

Her parents were concerned that their daughter who was barely out of her teens was spending a lot of time with a man they didn’t know.

Geoffrey of the other hand was afraid that if he showed up at their home, they would force him to marry her on the spot yet he wasn’t ready to take on that commitment. Unable to withstand the pressure, they broke up and she moved to Mombasa. It took only a month without her for him to realise that he couldn’t bear to lose her. He called her and told her that he was ready to marry her.

“Just as he had predicted, we got married that very weekend that I took him to meet my parents. He got a Muslim name and we exchanged our vows. All he wanted was to not lose me,” she smiles at the memory.

Three months later, in March 1997, they had a bigger wedding celebration to let all their friends and family know that they were together.

The most valuable lesson that she has learnt in their 19 years of marriage is that things like religion and tribe shouldn’t matter in love. That if there is friendship and commitment, a couple will always find a middle ground.

“We have an amazing relationship. I know that whatever happens, he will not abandon me,” she says.

He waited seven years to tell me

Hellen first saw Fred at a meeting for youth leaders at her church, the International Christian Center, Nairobi, in March 2007.

He was bubbly and funny and seemed to have an answer to every question.

“I remember thinking to myself, does this guy ever keep quiet?” she recalls. 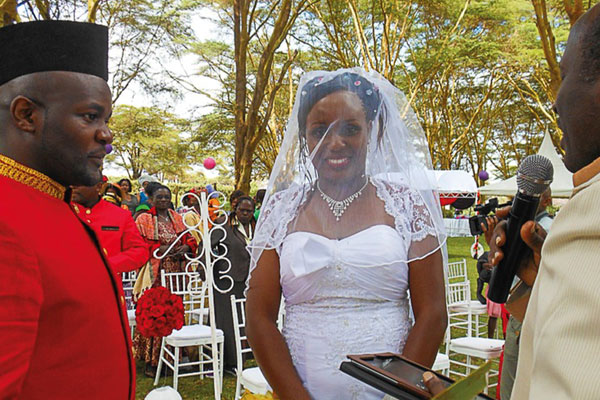 Hellen first saw Fred at a meeting for youth leaders at her church, the International Christian Center, Nairobi, in March 2007. PHOTO| COURTESY

What she did not know is that Fred was already hooked and in fact, on that very day, he went to the pastor and told him that she was the woman that he was going to marry.

For the next seven years, they served together in church. She, blissfully oblivious, while he spent his time warding the other young men off her trail. To discourage them, he would tell them that she was a very tough young woman.

He explains, “I had just come out of a relationship and I was on a three-year cleanse. Also, she worked in the airline industry and travelled a lot. I was afraid that she had someone out there and knowing that a confirmation of this would break my heart, I did not ask.”

“All our friends knew it. I was the only one in the dark. That thought did not cross my mind. Not even when two of our friends were preparing for their wedding in mid-2012 and they asked me to be the best maid while Fred was made the best man,” she says.

A few weeks after this appointment, Hellen was hosting several friends over at her house and Fred came and left without eating. She was furious.

When she called him for an explanation, he asked her out on a date. Up to this point, she had no idea that he was romantically interested in her. When this date finally happened several months later, they had dinner at Ole Sereni and then ended up talking until 4 in the morning.

“When he expressed his interest, I was still undecided because I had known him as a friend for so long. When I did some soul-searching, I realised that I had no reason at all not to date him.”

Two months later, in September 2012, he proposed marriage and they spent the next year planning their wedding which happened in November 2013.

In retrospect, she says that had he asked her seven years before, chances are that the relationship would have failed. She feels that seven years of close friendship prepared them for each other.

“Marriage is what you make it. No matter how many couples classes and seminars you attend, ultimately, it is what you do. Be picky about taking advice from other couples, just because something worked for their marriage doesn’t mean it is the answer for every marriage,” she advises.

In a white jersey and blue jeans, Timothy was tall, dark and handsome, had this calm and collected demeanour and an impressive CV. In fact, he was more experienced than she was.

“I remember looking at him as he left the room and thinking that he was somewhat snobbish.

When I went home that night, I shared my reservations about hiring him with my mother. While he was obviously the most qualified of the whole lot, I was worried that his expertise would make it hard to work with him,” she says.

Her mother advised her to go ahead and hire him so that she could learn from him.

When Timothy settled in on the job, Roselyn realised that he was warm and charming and he got along well with the rest of the team. Just a few weeks in, she had a huge crush on him.

Unfortunately, Timothy was in a committed relationship and she kept her feelings to herself. Several months later, the firm hit a rough patch and they both left to pursue other things. That was 10 years ago.

He was newly single and she had also just come from a broken relationship and not wanting to rush things, they did this for two years. At the start of 2007, they began dating officially.

“He stood by me when I was going through a hard season with my design company even before we started dating. I few months after we started dating, I knew I could spend the rest of my life with him.”

Timothy proposed in July 2010 and walked her down the aisle six months later. This is their fifth year of marriage.

One of their biggest challenge as a couple was getting both families to accept their relationship seeing as they are from different tribes. How do they make it work?

“We have learnt to lean into our marriage as opposed to leaning out. It is harder for something from outside to dent your relationship if you are working as a unit.

Also, our personalities complement each other. While I am short-fused, Tim is the calmer one of the two of us. When we fight, he is the one that brings sense to the arguments,” she says.

What’s Up Africa: Satirist asks how African is AfCon?

What's Up Africa: Satirist asks how African is AfCon?