House to appeal ruling on Mwende Mwinzi appointment as envoy 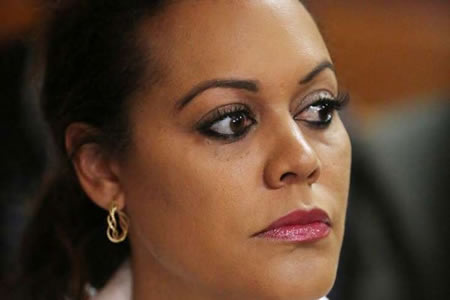 Mwende Mwinzi, the ambassadorial nominee to Seoul, South Korea, at a High Court in Miliamani, Nairobi, on October 7, 2019 during the mention of her case against renouncing her US citizenship.

House to appeal ruling on Mwende Mwinzi appointment as envoy

This presented an ambiguity, which the National Assembly says must be addressed, hence its decision to file an appeal. “Whereas the judge finds that the petitioner is protected by the law under Article 78(3) (b) of the Constitution, on the other hand, he finds that a person with dual nationality ought not to be a diplomat in order to safeguard the interests of the sending state, including national security,” states a brief prepared by Parliament’s litigation department, to National Assembly Speaker Justin Muturi. “To this end, it may be necessary for the National Assembly to file an appeal on the finding of the High Court that the petitioner is protected from the requirement to renounce her US citizenship in order to hold the position which she was nominated for.”

In the ruling, the judge established that the role of a diplomat is to represent interests of the sending state, including national security. “This is because the risk of dual citizenship may jeopardise the national interest of the Republic of Kenya against the interest of the foreign state,” he said. He also noted that the National Assembly demonstrated the process of Ms Mwinzi’s vetting and approval was conducted fairly and within the law. The judge also made a determination that will settle the matter of whether ambassadors are State officers. “The court found that the office of ambassador, though not a State office but a public office, is bound by provisions of section 31 and 52 of the Leadership and Integrity Act.”

The House Committee on Defence and Foreign Relations, chaired by Kajiado South MP Katoo ole Metito, vetted Ms Mwinzi and other individuals for the envoy positions in June. However, while recommending appointment of all the candidates by the President, the committee inserted a rider in its report – that Ms Mwinzi renounces her US citizenship. She challenged the decision in court, seeking a ruling for her appointment once nominated by the President and vetted and approved by parliamentarians. The judge dismissed the application, saying the process was purely political and that the court was ill-equipped to do the vetting as it lacked the constitutional and statutory mandate to exercise such jurisdiction. The judge also said that granting the orders Ms Mwinzi sought would be tantamount to circumventing a necessary constitutional safeguard and usurping the authority of the National Assembly and the appointing authority. In the end, the court determined that the petition was not ripe for determination since the process of the appointment was yet to be concluded by the President.

The appointment of an envoy is purely an administrative process, which is tedious and time consuming. Once vetting is concluded and a nominee is approved by the National Assembly, the President sends the appointment letter to the ministry in charge, the Ministry of Foreign Affairs in Ms Mwinzi’s case. The ministry then conduct a mandatory course for the candidate. It then informs the host country of intention to dispatch the candidate and waits for a response, a process that takes time. If the ministry receives a no-objection, the candidate is dispatched. Otherwise, the process begins afresh. – nation.co.ke

House to appeal ruling on Mwende Mwinzi appointment as envoy Reviewed by samrack on December 5, 2019 .